Woman alone on High Park balcony when she fell to her death: Sources

Troubled Regis Korchinski-Paquet plunged to her death while trying to vault to a neighbouring balcony at her High Park highrise on Wednesday, sources tell the Toronto Sun.

An independent witness claims the 29-year-old was alone on the balcony before her deadly fall — a statement that contradicts the accusation made in the aftermath by a relative who claimed police officers “threw my cousin off the building.”

The harrowing allegation sparked outrage among family and community members, prompting Toronto Police Chief Mark Saunders to call for calm Friday in advance of planned protests while describing social media chatter about the tragic death as “toxic misinformation” and “lies.”

While indicating Friday he has “a lot” he’d like to say but can’t because the province’s Special Investigations Unit invoked its mandate, Saunders still pushed the line more than past chiefs explaining the service’s inability to comment has “created” a vacuum that people have filled with inaccurate information.

Thousands rally in Toronto after death of Regis Korchinski-Paquet

Thousands of people held a rally in Toronto Saturday afternoon in response to the death of 29-year-old Regis Korchinski-Paquet.

The protest, shared on social media under the hashtag #JusticeForRegis and organized by the group Not Another Black Life, began around 2 p.m. at Christie Pits park near Bloor Street West and Christie Street. The march was scheduled to culminate at Queen’s Park, but protesters instead made their way to Toronto Police Headquarters.

The rally was a response to Korchinski-Paquet’s death, as well as the wider issue of anti-Black and anti-Indigenous racism.

“The violence we are experiencing globally is not OK and will never be OK,” one protester said. […]

Sources claim officers responded to an assault call around 5:15 p.m. on the 29th floor of the apartment building on High Park Ave., north of Bloor St. W., involving Korchinski-Paquet as the aggressor in a dispute with a sibling.

One senior officer and several junior cops brought Korchinski-Paquet and her sibling into the apartment hallway to defuse the dispute over the use of the TV.

Korchinski-Paquet asked the officers if she could re-enter the apartment to use the washroom. The officers agreed but wouldn’t allow the brother back into the apartment in order to prevent the conflict from restarting.

Instead of going to the bathroom, the woman rushed to the balcony, sources allege, claiming Korchinski-Paquet then prevented officers from accessing the balcony. […]

“It appears she slipped while trying to scale one balcony to another,” a police source said. “She was trying to get away.” 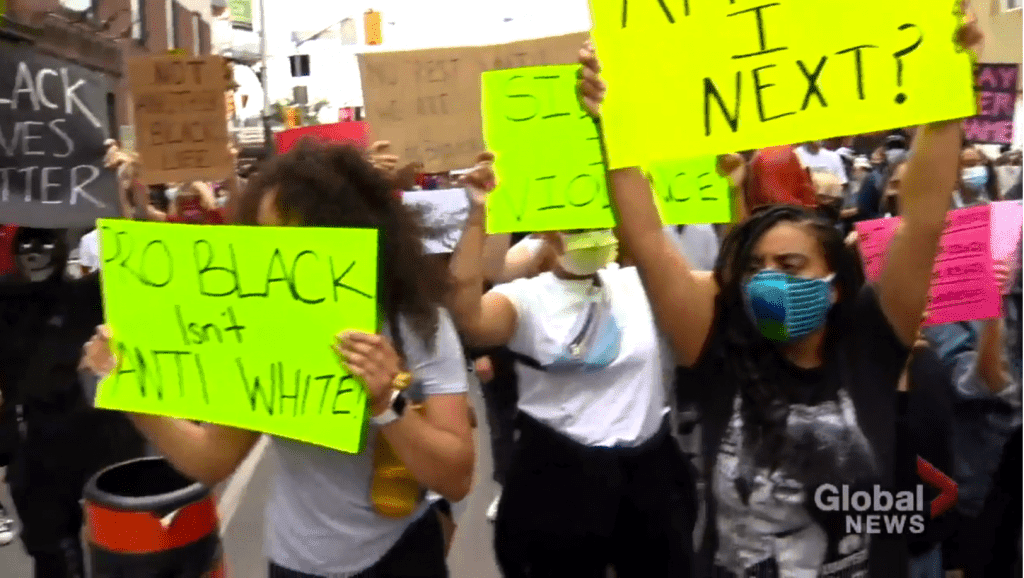 CBC reframes the entire thing to be about racist police without directly lying about it all, but worse, lying by omission to allow people to believe she died because of racist police action when in fact the police were called to her apartment because she was fighting with her brother over the TV, and then lied to police to go inside and then locked the police out of the balcony and then fell, unnecessarily escaping by leaping to another balcony.

And there you have it. Marxist thesis, counter thesis, solution. And Western Civilization falls a few inches closer to extinction. The final solution.

2 Replies to “This is new. Protest against police in Toronto because a black woman fell jumping from balcony to balcony due to fight over TV”