BLOWN AWAY by the amount of patriots that just came to my side to make this happen.
I will be periscoping LIVE about this entire debacle, in 30 mins.
I am blessed to know you all. ?? pic.twitter.com/r91vwRoVuA

Candace Owens tweeted out the exact same phrase that the new, hate filled, racist editor of the New York Times did about old white people, but replaced the word “white” with the word “Black”. I saw this tweet not an hour ago.

Apparently, she had her twitter account immediately suspended. You know, as opposed to being made an editor at the New York Times.

It seems to have ben restored now, but she is currently doing a live periscope on this. When I find it, I will post it. 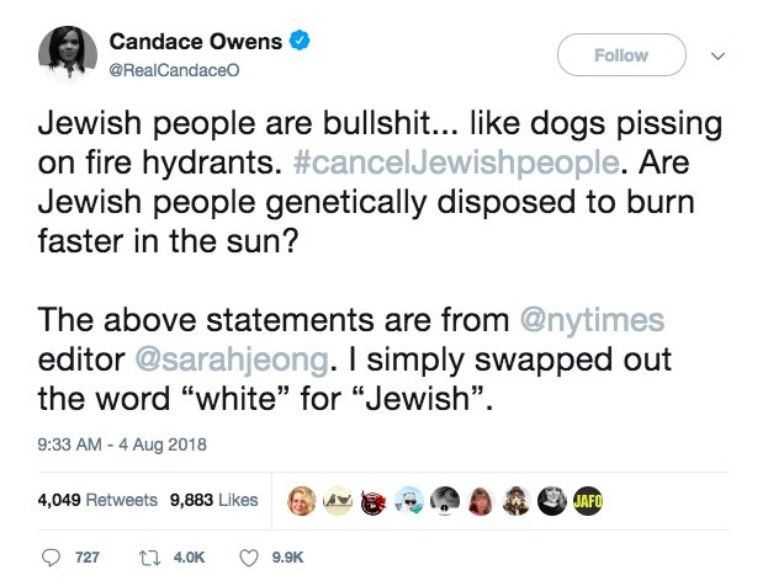 (Candace also did one substituting black people for white people in an otherwise identical tweet to the new editor at the New York Times. The fact is, Twitter like the rest of social media along with the government-media complex, or should I say, the Marxist-deepstate-media complex, is brutally, even staggeringly biased and often doesn’t even bother to hide it anymore as Twitter did in this case. The New York Times made up a pathetic story about how this new editor was using a form of sarcasm in her tweets to illustrate a point but a rough search shows that was a lie and everyone knew it. As her speech at Harvard makes clear as day in the Saudi desert.