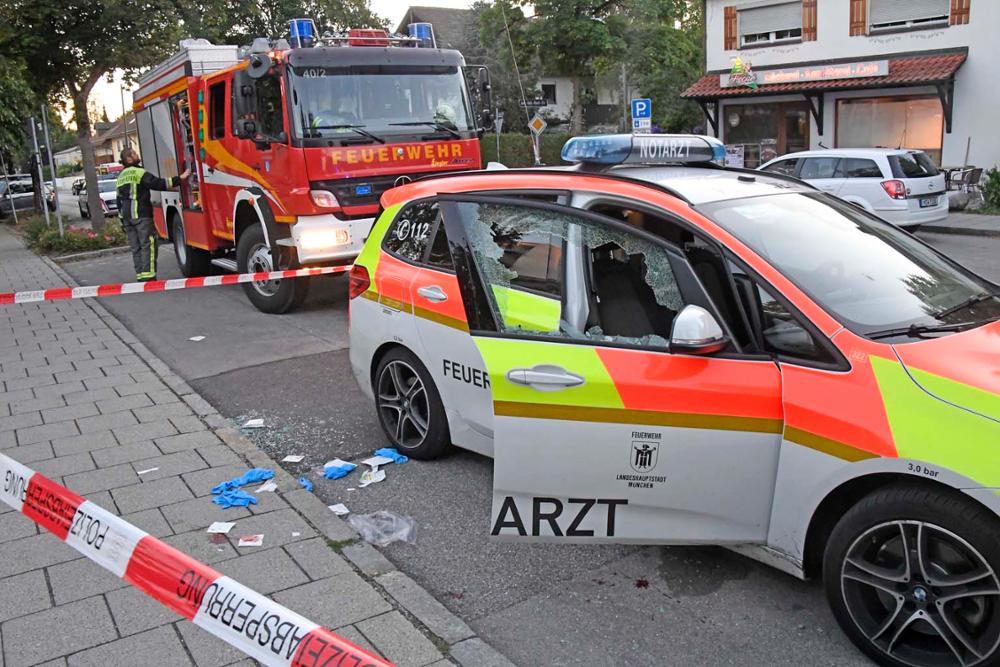 An original translation from Abendzeitung, Munich:

According to first information by police at the scene, two unaccompanied underage refugees riot in Ottobrunn (suburb of Munich – translator). With a full Whiskey bottle, one of the two smashes in the side window of an emergency doctor’s car and wounds the emergency doctor.

According to first information by the police, one of the two smashed in the side window of the car with a full Whiskey bottle and struck the emergency doctor right in the face. The woman lost consciousness and lost several teeth. Then, the youth threw the bottle at the doctor’s driver who suffered injuries, too.

The obviously drunk duo – who had apparently been rioting moments before – fled, but was apprehended and overpowered by police a few hundred meters away. Allegedly, during this measure, several residents of Ottobrunn attacked the officers to help the alleged perpetrators, who were then taken in preliminary detention.

Merkur, Munich, provide a bit more context, 23.06.18 11:13AM CET (original translation):
Two youths (17 and 20), who are unaccompanied refugees, wanted to enter the Ottobrunn youth club with a trolley filled with alcoholic drinks after 8 PM. When one of the caretakers pointed out the alcohol prohibition, and called a colleague for help, the two drunk teenagers attacked the women, and then left the building.
At the same time, the Ottobrunn fire brigade had arrived at the nearby Hanns-Seidel-Haus, the old people’s home, to help a person with a life threatening condition. While the fire brigade had already entered the building, the emergency vehicle from the Neuperlach hospital arrived. In this moment, the 20-year-old attacked the car, and, from a distance of about 1.5 meters, threw a full Whiskey bottle into the side window of the passenger seat. It smashed the window, hit the emergency doctor who was sitting in the car in the face, and smashed out several of her teeth. She suffered a fractured jaw, a concussion, and cutting wounds in her face. The paramedic who was driving the car just suffered cut wounds from the window splinters.