Check out this article from Jihad Watch. But whatever you do, do NOT make a Youtube video about it. Youtube is targeting any proof of islamic antisemitism and punishing the messenger over, and over again.

“Jewish Youths Attacked by Arabs in Berlin Train Station,” by David Israel, Jewish Press, June 4, 2018 (thanks to The Religion of Peace):

Another violent attack on Jews took place in Berlin Saturday night at Bahnhof Zoo station, according to Bild.

The newspaper reported: “A disgusting, brutal, anti-Semitic incident took place at Bahnhof Zoo last night. The victims: three young Jews. The perpetrators: three young Arabs. They said, among other things: ‘This is our town, our precinct. If I see you again, I’ll slit your throat, you [expletive] Jew.’”

Please click through to Jihad Watch for the whole thing.

We had this very shortly after it was on Facebook and put it on our Youtube channel. It went viral from there across many Youtube channels, including, but not limited to, an actual white supremacist, antisemitic channel on Youtube.

However our, and only our, copy of this video was pulled and our channel got a “community Standards” strike for posting it, even though RT, and a dozen left wing German news sites had the exact same video from the same source, and some even may have downloaded it from our own video channel.

We appealed the decision and the appeal was rejected.

Then, a few weeks to a month later, after a second attempt at an appeal, which isn’t even allowed, and was probably ignored, all of a sudden, it was restored and the strike was removed. 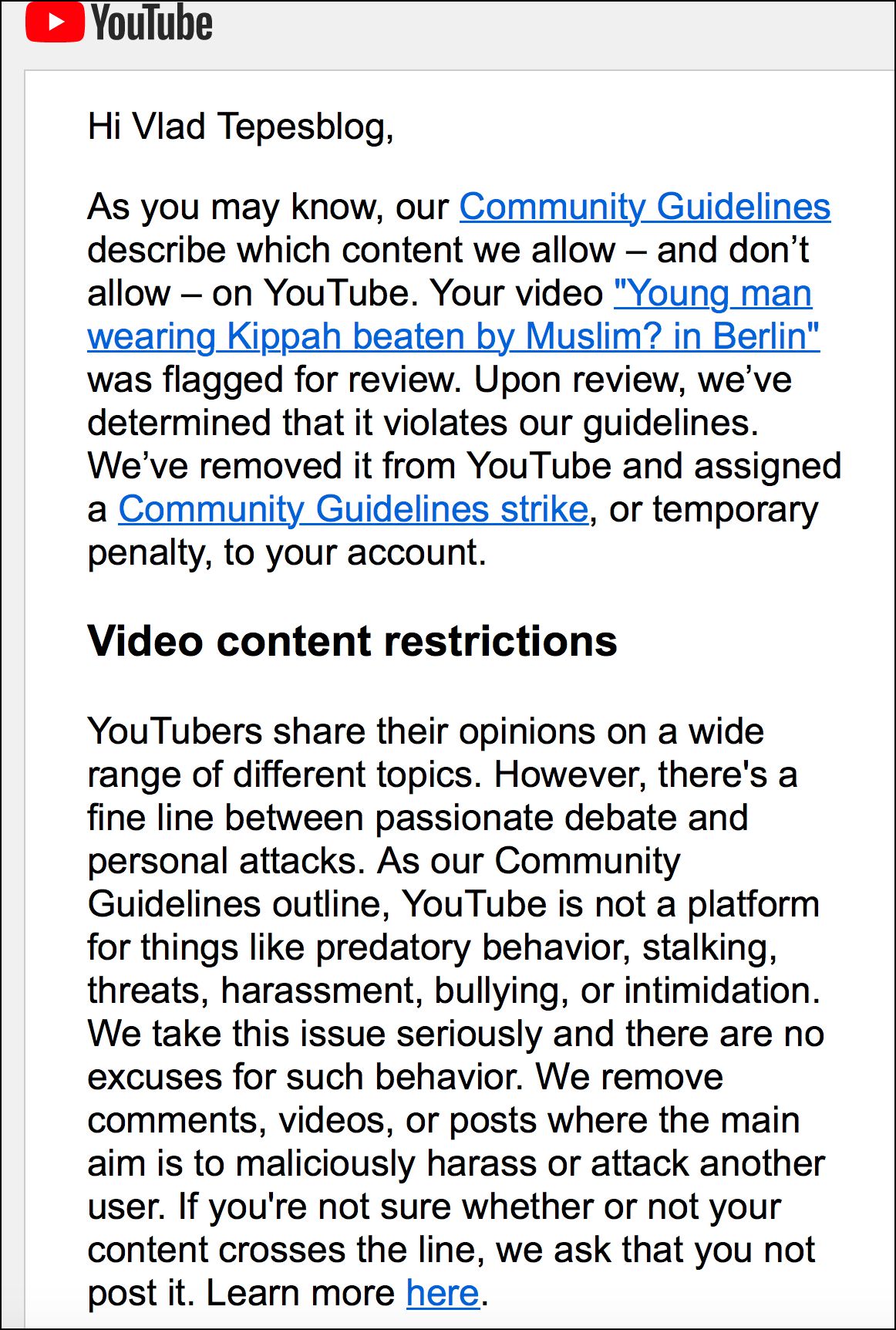 Yup. Youtube is punishing me for their own decision to reinstate the video they took down months earlier.

Is Youtube just stupid? Fickle? Incompetent? Vicious? Is it content driven? If so, why deny the appeal, reinstate it then wait a month and take it down and apply a strike again.

Who knows. But one thing is for sure.

At this stage they are getting boring.

5 Replies to “Ramadan in Germany: Muslims kick, punch Jews, say “If I see you again, I’ll slit your throat, you [expletive] Jew””