Berlin – on Wednesday, a loudly yelling Afghan ran towards Angela Merkel, as she was leaving the Reichstag, and was wrestled down by two security guards. It was caught on camera, and aired live, more or less accidentally.

Please have a look at the two following videos and compare.

The first one aired LIVE, so the interviewer and his guest keep on talking, as they have no idea what is going on. The sound is un-edited and you can hear the yelling very clearly.

Then please watch the second clip, produced by Bild newspaper afterwards, and compare the sound of the two.

1. The clip that aired live, relevant part beginning at 7 seconds in:

Die Welt reassure us that the “disturber was merely running towards Merkel”, no harm intended, and that there is no reason for a “knee jerk reaction”, just because someone runs toward you, yelling “something in a foreign language” that “sounds similar to Allahu akbar”.

We are translating it for the humor:

“Heart stopping moment in front of the Bundestag: On Wednesday, an Afghan ran towards the chancellor, yelling something – then, a bodyguard stopped him. WELT learned from police insiders what they know about the man and how they assess the incident.

(…) He is an Afghan, 23 years old. But he does not live in Berlin. He is from Swabian Ostfildern, southeast of Stuttgart. And he has no police record so far.

His motive does not seem to have been hostile. He simply ran towards the world-famous chancellor. Upon doing so, he was stopped by a bodyguard, whose job it simply is to prevent such incidents. And he did not yell anything political – no slogans, and definitely no suicide attack slogans.

So the case is treated by regular police, not by state security.”

One is reminded of the famous advice that a German criminal psychologist gave, after the axe attack on board a Würzburg train: 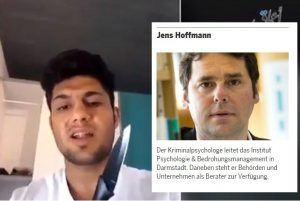 “It is understandable that you feel threatened when someone with an axe enters the train. But we mustn’t become paranoid. It helps to go there and politely ask what it’s all about.”

7 Replies to “German Press on Attack on Merkel: When someone runs towards you, yelling ‘Allahu Akbar’, don’t be bigoted!”