The group is holding a demo through this area which has been in the news a lot as its rapidly Islamizing.

But it a Christmas Demo, with traditional Danish Christmas signs and little to no critique of Islam.

Its planned to start at noon local time, so six hours from the time of this correction.

Friends of Vlad Tepes Blog, may remember Tania G., the leader of PEGIDA Denmark, also known as For Freedom Denmark.

A more courageous fighter for classical liberalism you will not meet. And with a heart to match.

Tania and her group are hosting a demo in an area of Copenhagen tomorrow. As they are ahead of ET by 6 Hours, that means in about 6 hours from the time of this writing.

The plan is to have carols, traditional Christmas treats, and possibly even a short and somewhat generic service for this most significant Holliday in the Christian faith, in the capital of a nation who’s flag has the Cross as its emblem in no uncertain terms.

The only thing is, they are holding it in an area which is teetering on the brink of becoming a Muslim no-go zone. The area, for the first time, has stopped having Christmas decorations in the stores. And the local shops are not contributing to any Christmas activities in the area.

The left is furious that For Freedom would dare to make an incursion into the freshly Balkanized region Islam has established and is lashing out.

Below, a photo from an article in the Danish Press about how the lawyer for PEGIDA.DK’s office was vandalized. 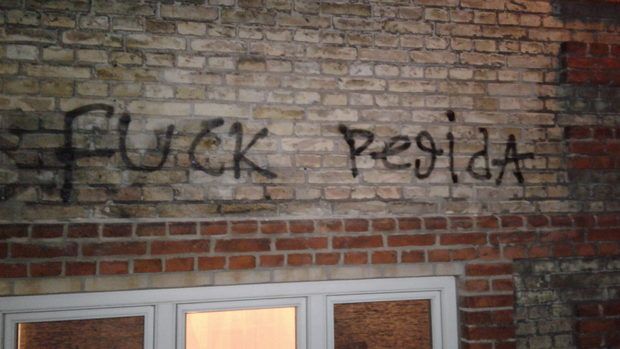 Most likely it was ANTIFA who did this action, as it was they, who at the last demonstration of PEGIDA Denmark, actually threw STONES at the participating members. Most of whom are working, middle aged very decent people and classical liberals.

The article also explains that a fire hydrant with tape around the trigger was thrown into the offices so that everything inside was covered in flame retardant powder.

One could argue that was at least a prophylactic of sorts against what ANTIFA more typically does.

But I doubt that was the intention.

Here is an article from the far left wing violent extremist Danish media on the upcoming Christmas party by Tania and PEGIDA Dk.

It needs to go through Google Translate. And it has a great deal of scorn and criticism for those who oppose islamic manifest destiny as well.

I would like to wish the fine people of PEGIDA Denmark the best of luck and an excitement free Christmas party.

But the Copenhagen police have informed them that they should expect difficulties.

Video of the event should start coming in by dinner time Eastern, and we will do our level best to get it up as quickly as its available, along with an interview with Tania.

5 Replies to “The left in the West, feels cornered, and lashes out more dangerously”