An original translation by José Atento

São Paulo – An extremist group in Brazil expressed support for the terrorist group Islamic State 18 days before the start of the Olympic Games in Rio de Janeiro. The channel “Ansar al-Khilafah #Brazil” on the Telegram messaging application has been revealed by a team of specialized monitoring terror activity SITE Intelligence Group.

According to the director of the institution, Rita Katz, this is the first type of group to form in South America. As the Olympics near, the expert warns of the growing size and engagement of such groups with the date of sporting event so close.

“A channel Telegram called Ansar al-Khilafah #Brazil posted a pledge of allegiance to the leader of ISIS Baghdadi,” the tweet team.

Katz adds: “Declaration of fidelity to IS is the first of a group in South America. Worrying: Western languages channels (English, Portuguese, Spanish, German, etc.) has shown dramatic increase in size and engagement.”

Here are the tweets. 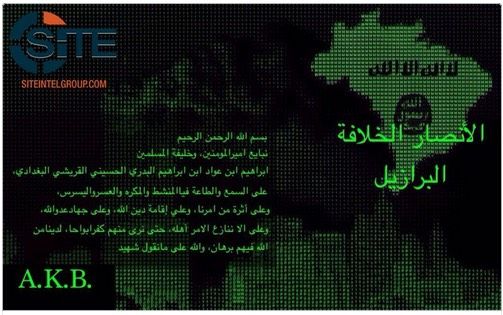 The Telegram channel called “Ansar al-Khilafah #Brazil” posted a pledge of allegiance to #ISIS leader Baghdadi pic.twitter.com/gRjDiE9DLG
– SITE Intel Group (@siteintelgroup) July 18, 2016
1) Pledge to #ISIS by “Ansar al-Khilafah #Brazil” is 1st to come from a group in #SouthAmerica https://t.co/FSe9oj1tDm
– Rita Katz (@Rita_Katz) July 18, 2016
Troubling: Western-language channels #ISIS (Inglês, Portuguese, Spanish, German, etc.) showing drastic Increase in BOTH quality & speed.
– Rita Katz (@Rita_Katz) July 18, 2016
Rita is responsible for the group that had reported in June about the recent formation of an information service of ISIS in Portuguese and also have access to the video of the death of journalist Steven Joel Sotloff by the group even before its disclosure.

THE SITE (acronym for “Search for International Terrorist Entities”) is a highly recognized group in the United States, hired to monitor jihadist activities by the US government and private companies, as a kind of risk consultancy.

In 2004 Katz was praised by the FBI for his contributions to research on terrorism and, in 2007, his group was credited with finding the first videos of Osama bin Laden after three years of silence.

[to see the tweets properly formatted with the links, please go to source link at top]