From this French language site: 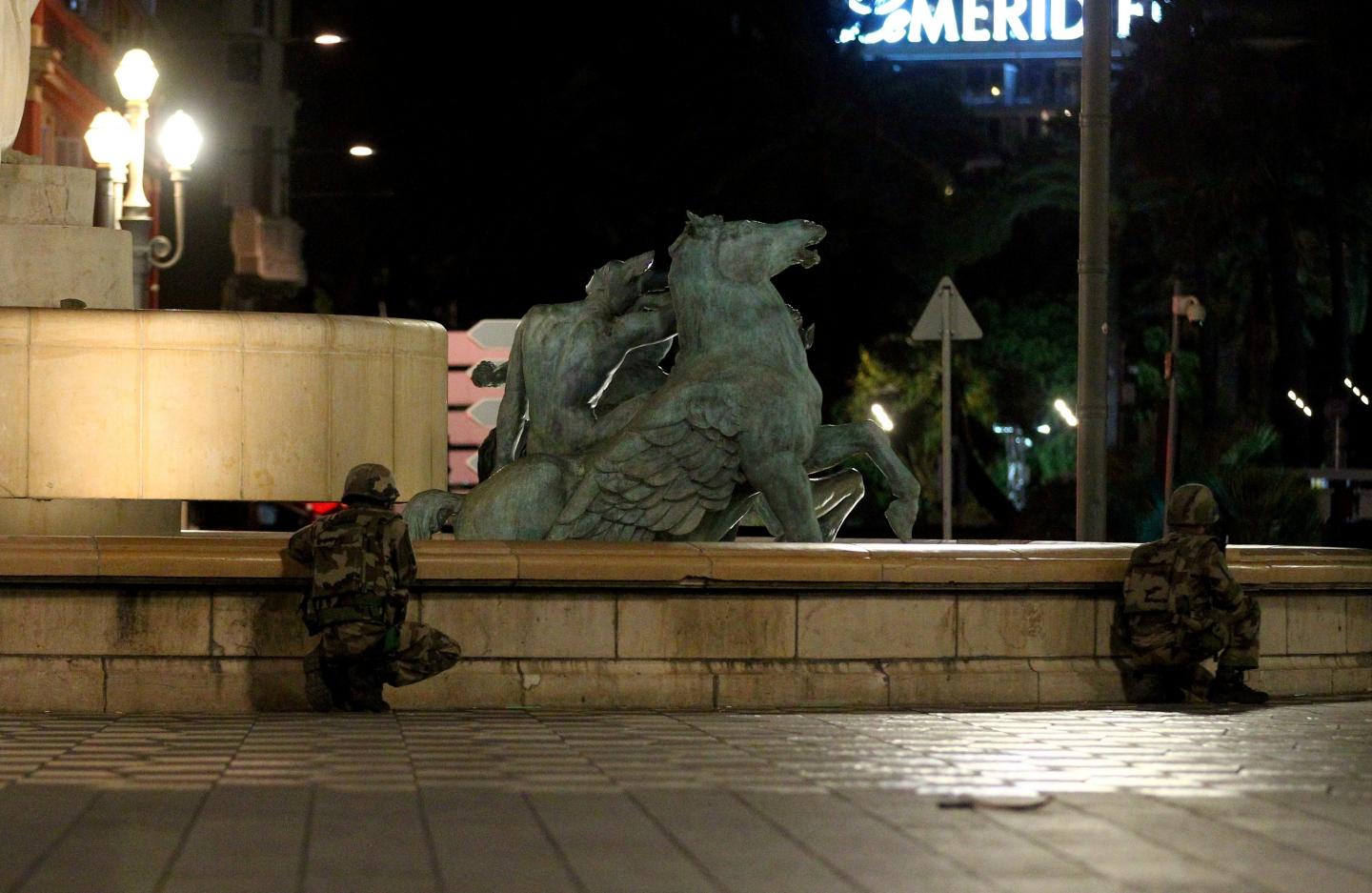 INFO NICE MORNING. A Nice resident of Tunisian origin at the wheel of the truck [NT  “Resident” here implies that he is a French passport holder]
A Nice resident of 31 years of age, of Tunisian origin, was driving the truck that claimed the lives of over 70 people on the Promenade in Nice on Thursday night.
According to our information, it was a Nice resident from Tunisia that was driving the truck. The 31 years old man has also fired at the crowd as he drove. More than 70 people died.
His truck was loaded with weapons and grenades.
The driver was shot dead by police.
___
DIRECT. At least 80 dead after a truck plowed into the crowd after the fireworks in Nice
A truck drove through the crowd gathered for the fireworks on Thursday evening shortly after 10:30 pm, leaving more than 70 dead.
A truck drove through the crowd waiting for the fireworks on the Promenade des Anglais  on Thursday, shortly after 10:30 pm.
A provisional toll reported at least 75 dead and over 40 seriously injured.
11:44 pm UN condemns attack “barbaric and cowardly”
The UN Security Council has “condemned in the strongest terms the barbaric terrorist and cowardly attack” committed Thursday in Nice (France).
In a unanimous statement, the 15 members of the Council expressed “deep sympathy and condolences” to the families of the victims and the French government.
They reiterated “that terrorism in all its forms is one of the most serious threats to international peace and security.”
“All acts of terrorism are criminal and unjustifiable,” say the 15 countries, which reaffirmed “the need for all States to fight” the terrorist threat “by all means” in accordance with international laws.
Council members “also emphasize the need to prosecute those responsible for acts of terrorism.”
11:42 p.m. The CFCM and the Great Mosque of Paris condemned the bombing in Nice
The French Council of the Muslim Faith (CFCM) and the Great Mosque of Paris condemned the attack that Thursday night in Nice caused at least 80 dead, mowed down by a truck crashed into the crowd on the Promenade des Anglais.”France has just been hit again by an attack of extreme gravity,” laments the CFCM in a statement, condemning the attack “heinous and abject hitting our country on the day of the national holiday that celebrates values of liberty, equality and fraternity. “
The CFCM transmits its total solidarity with the inhabitants of Nice, expresses its deep sympathy to the families of the many victims and wish a speedy recovery to the injured, “it added. He also called on Muslims in France to pray Friday” in memory of the victims this barbaric attack. “
11:32 pm 18 people injured in an absolute emergency state
A final provisional toll reported 80 dead. 18 seriously injured people are absolute emergency.
10:39 pm
Interior Ministry
The vigipirate plan was put on “#attentat alerte”[terrorist attack alert] in the department #Nice
The @gouvernementFR advocates the cancellation of all events planned to #Nice in the coming days
10:37pm The Vigipirate raised in “Terrorist attack alert”
The interior minister announced Friday night that the plan Vigipirate   was updated into  ” terrorist attack alert” the department of Alpes-Maritimes.
10:34
Gregory Leclerc
LIVE on #Periscope: Press Conference Bernard Cazeneuve #attentatnice
10:24Promenade des Anglais closed indefinitely
It will be impossible to drive on the Prom ‘for an indefinite period, between Carras and the Theatre de Verdure.
The city of Nice invites motorists to take the Mathis and the highway. Bypassing the town will be free during the closure of the Prom ‘.
9:54
Nice-Matin
Hollande: “I would go to Nice after the next defense counsel” #AttentatNice
Hollande: “I decided following the suggestion of the prime minister that we will maintain high-level operation Sentinel” #AttentatNice
Hollande: “We will further strengthen our actions in Syria and Iraq” #AttentatNice
Hollande: “We can deploy the operational reserve everywhere where we need them” #AttentatNice
9:53 pm
Nice-Matin
Hollande: “I decided to use the operational reserve” #AttentatNice
Hollande:”Nothing will make us lose our determination to fight against terrorism” #AttentatNice
Hollande:The state of emergency will be extended by three months “#AttentatNice
9:39 pm
National Police 06
[#PerimetreSecurite] English promenade closed to pedestrians #LENVAL #JARDIN ALBERT 1. Please follow these instructions
9:27 pm
picture
9:19 pm
Christian Estrosi
Tomorrow the flags of the city will be at half mast. After the cancellation of the Rihanna concert, jazz festival is canceled.
9:16 pm At least 80 dead according to a latest report
9:08 pm. A Nice resident from Tunisia at the wheel of the truck
According to our information, this is a Nice resident originally from Tunisia which led the truck. The 31 years old man has also fired at the crowd as he drove. More than 70 people died.
8:40 pm
Interior Ministry
#Nice 2 telephone numbers 01 43 17 56 46 for public information and 04 93 72 22 22 for the relatives of the victims # Nice06
8:40 pm Christian Estrosi evokes “the worst tragedy in the history of Nice”
8:38 pm  Barack Obama “Our thoughts and prayers are with the families”
The President of the United States responded after the attack in Nice.
“We are in solidarity with France, our oldest ally, when she is facing this attack,” Obama said in a statement, offering the help of the United States in the investigation to find those responsible for this tragedy.
other reactions of the politicians [NT do you want more platitudes?]
8:30 pm New update 77 dead
Christian Estrosi
The death toll of this terrible attack is 77 victims.
“People are running, it’s panic. He went on the Prom and he plowed into everybody,” explains Damien Allemand, our colleague, present at the time of the drama .. “There are people covered in blood, probably many dead. “
On Twitter, the evidence began to arrive shortly after 10:30 pm.
Natalie Huron
People stranded and hiding in the lobbies of buildings, deserted terraces and in the emergency cars # Nice06
Ougaverde
# Nice06 a total scene of carnage. Many testimonies speak of a truck that drove into the crowd by the sea.
Marco Demerling
Friends from Nice, I hope you are safe. ? # Nice06
Stabilo
I am on site, the cops told us to run in the opposite direction