1. This video from March 25 this year, shows a massive display of fealty to the Islamic State and features the oft repeated chant of warning to Jewish people that their total extinction will be soon and at the hands of the Muslims. It appears to be in Idlib Islamic State.

2. Peculiar Siberian cafe with Obama toilet paper and other signs of ‘violent extremism’ 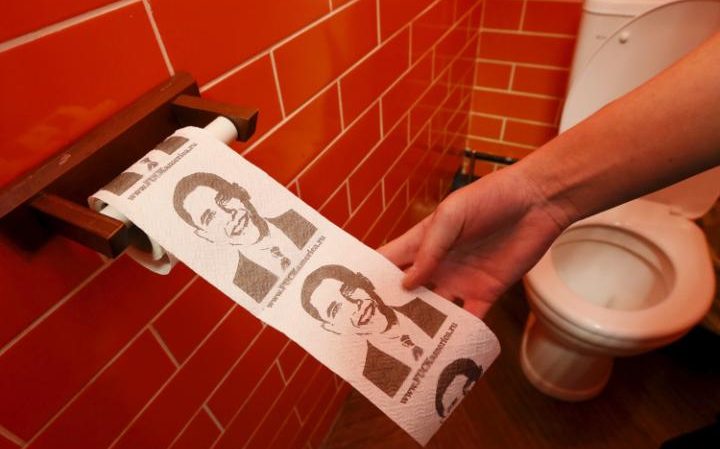 Vladimir Putin fans now have the perfect place to toast to the Russian leader thanks to a newly opened cafe dedicated solely to the action man president.

Welcome to the incredibly patriotic President Cafe in eastern Siberia, located around 4,000 km (2,500 miles) from Moscow, where Putin’s face covers the walls and Barack Obama’s smiling face is on the toilet paper.

3. Here is a pretty thorough look at the Generation Identitaire action at a play sympathetic to migrants in Austria yesterday. Seems there was more to the story than anyone bothered to report. Their own explanation of the event is in the video below but here at the Rebel is a few related videos which offer some context to the issue.

4. CIJ News does an expose on the Toronto Star’s mealy mouthed explanation for why they didn’t reprint Charlie Hebdo cartoons after the massacre in Paris and more.

(We all know the real reason. Fear for the safety of the staff at the Star from those wonderful, rich, diverse Muslims the star is so fond of)

5. Police arrest Isis recruiter who was planning attacks in Spain

6. Pushing for criminalization of truth about Islam in Austria:

(This needs to be seen for what it is. Another national manifestation of the CVE/UN bill 16/18 similar to Quebec’s bill 59)

Islamophobia or anti-Muslim racism is still not even acknowledged as a crime or a motivation for hate-crime in most European countries. In fact we still face a continuing absence of reliable and nation- as well as European-wide data on Islamophobic incidents.

In 2014, only five states of the 57 Organization for Security and Cooperation in Europe (OSCE) member states officially reported on hate crimes against Muslims, whereas civil society reported in 21 countries.

The European Islamophobia Report (EIR) analyzed Islamophobia in 25 European countries in 2015. This is one part of the gap, where the EIR attempts to make a contribution. The other aspect is that there are still many people in Europe who refuse to even recognize that there is such a thing as Islamophobia or anti-Muslim racism.

To give an example: In Austrian daily Der Standard, an article was published highlighting the main findings of the EIR. Within the first 6 hours, there were 1,000 comments. A day later, that figure grew to more than 2,400. And unfortunately, we could not find a single positive comment.

One commentator said: “Europe needs another Prince Eugene”. For those of you unfamiliar with Prince Eugene of Savoy: He was a general of the Holy Roman Imperial Army who fought back the Ottomans at the Siege of Vienna in 1683.

(The publisher of the above article seems to be indicating that a factual history of Europe, and Austria/Vienna in particular, should be criminalized)

Thank you M., Wrath of Khan, Xanthippa, Maria J., and all. Much much more to come today. Starting to catch up to the material to deal with now that both Robert Spencer videos are published. Perhaps later some of the Q&As from Ottawa and Montreal will get done.