A police patrol of 10 officers was forced to flee a refugee center in Sweden after being surrounded by a mob of violent migrants. Law enforcement officials had arrived to relocate a 10-year-old boy after reports of his repeated rape at the facility.

One of the officers described what had happened in a police report obtained by the Vestmanlands Läns Tidning newspaper.

“Even more people appeared behind us. I was mentally prepared to fight for my life. We were 10 police officers in a narrow corridor. And I hear someone yell that there is an emergency exit,” the officer said.

The incident took place in the Signalisten asylum in Västerås last Wednesday but police didn’t provide any information to the press until Monday this week. 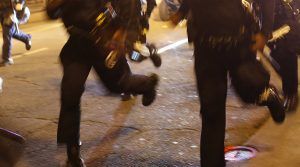 The authorities decided to relocate some of the refugees from the Signalisten asylum after reports on Saturday that the boy was being subjected to repeated rape there. However, the asylum staff were unable to complete the transfer by themselves as they were met by hostile attitude from the refugees, so they called the police.

With Swedish Prime Minister Stefan Lofven stating on Monday that more staff are needed among the police dealing with an influx of asylum seekers, it’s clear that the authorities and the police are struggling to keep things under control.

“Many of the problems we are now facing help to prove the point that Swedish police have long been underfunded and understaffed,”Police Union Director Lena Nitz, told TT news agency.

Just this Monday a young woman, a refugee center worker in Mölndal, was stabbed to death when an argument broke out at the center for underage unaccompanied refugees. Alexandra Mezher, 22, was taken to hospital with severe injuries and later died.

She was stabbed by a 15-year-old boy who was later arrested on suspicion of murder. Mezher’s thesis was titled ‘The Road to Non-Criminal – A Lifestyle Change’. She believed that creating a trustful relationship with people was key for a social worker. The center where she worked housed 10 youths aged between 14 and 17.

Police have warned citizens that train stations are overrun by gangs of refugee boys who assault and grope women, and pickpocket and harass passengers.