“A 43-year-old female train conductor on the InterCity train between Hanover and Göttingen only wanted to check the tickets. In the infant compartment she got to see something else instead of a ticket.

The curtains were drawn, so the conductor opened the door to the compartment. What she saw then, the police Hannover describes as follows:

It concerns a 22-year-old Syrian who lives in Mecklenburg-Vorpommern.”

2. Belgium knew in 2012 already that Paris suspects were plotting attacks

Belgian authorities knew as early as 2012 that terrorists linked to the bloodshed in Paris were plotting attacks in the West. But little was done to disrupt the build-up of a network that subsequently became a cornerstone of the worst violence since decades in France.

Gelel Attar, the Paris suspect in whose apartment attacks were plotted already four years ago

The revelation, published by the Belgian newspaper ‘Het Laatste Nieuws’, is based on court documents mentioning a secret memo that the State Security addressed to the Federal Prosecutor’s Office on April 11, 2012. It contained a warning about suspicious meetings in an apartment in the now notorious Brussels municipality of Molenbeek. Conversations overheard there were about the need for armed attacks against the “principal adversary of Islam”: Western democracy. Apparently, plans were made already to obtain heavy weapons and explosives to carry them out.

3. Sweden’s Army Chief Warns Of WORLD WAR 3 Inside Europe ‘Within a Few Years’

Sweden, which has not officially been at war in over 200 years, will soon be pulled into a European conflict according to an internal army document sent to soldiers and civil servants ahead of army manoeuvres next week. Citing the situation in Sweden, the recent decisions of domestic politicians, and global instability, the chief of the Swedish army General Anders Brännström told men under his command they could expect to be fighting a war in Europe against skilled opponents “within a few years”.

As well as soldiers, the booklet containing his stark warning has also been given to civil servants, politicians, and guests of next week’s annual manoeuvres and military demonstrations and exercises. Discussing the new military budget passed by the Swedish government last year for 2016-2020, General Brännström said: “The requirement of our ability to perform armed combat against a skilled opponent was clear, and this in context of the objective to create a front line against military attack and defend Sweden”.

Carnival costumes for children to dress up as wartime refugees have been taken off the German edition of Amazon‘s website over fears they offend refugees.

Although the outfits have now been removed from other amazon stores including Italy, they are still available in the UK.

Although the outfits have now been removed from other amazon stores including Italy, they are still available in the UK. (Costumes pictured on the German version of Amazon’s website)

5. German city bans migrants from its nightclubs after women report they were sexually assaulted in toilets and slipped date-rape drugs in their drinks

A German university city with a Green party migrant-supporting administration has banned refugees from several nightclubs following complaints from females of sexual harassment and theft.

Women have allegedly complained to managers of clubs in Freiburg, southwest Germany, about being fed date-rape drugs and being accosted in toilets.

Another woman claimed she had been raped while a bouncer was allegedly stabbed by a migrant. 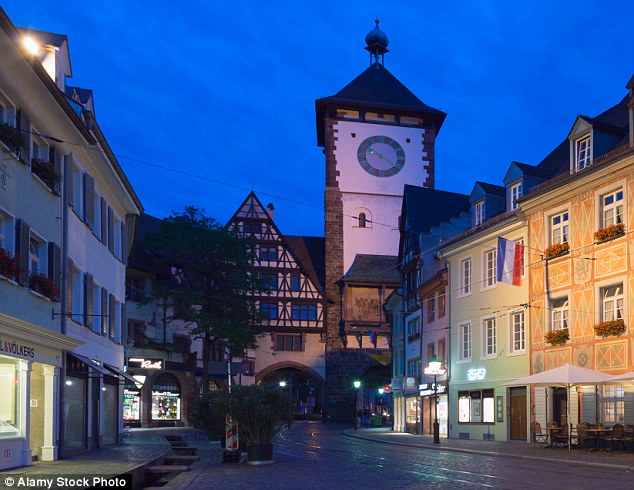 Women have allegedly complained to managers of clubs in Freiburg, in southwest Germany, about being fed date-rape drugs and being accosted in toilets (file picture of Freiburg)

One club now issues special cards to foreigners in which they are allowed entry only if they agree to reject ‘violence, sexism and discrimination.’ Other nightspots have apparently enforced a blanket ban.

According to local media reports, the problem extends to six discos in the town.

‘No more entry for asylum seekers,’ was the headline in the weekend edition of the newspaper Badische Zeitung.

Freiburg’s welfare and social services leader Ulrich von Kirchbach warned: ‘It is discrimination. One cannot rule out a whole group of people like this.’

Thank you Nicolai Sennels, Kathy, M., Wrath of Khan, Richard, Maria J., Buck, and all and more to come.

2 Replies to “More and more serious people seem to be echoing the thoughts of the Counter-Jihad these days: Links 2 on Jan. 26 – 2016”