1. Greer ban at university ‘is to seem fair to Muslims’: Vince Cable warns feminists and right-wingers will be censored to prove institutions are not ‘anti-Islamic’

(They should really ban Gypsies and studies of Gypsies too. I mean, you know, to be fair to Nazis. And get rid of handicap access as well for the same reason. They already have the Jews covered by being fair to muslims so thats OK. The most important thing is that truth cannot get in the way of advancing the Cultural Marxist narrative)

Universities will ban feminists, Right-wing politicians and other controversial speakers to appear fair on Muslims, Vince Cable has warned. The ex-business secretary said the Prevent strategy would make institutions feel compelled to censor all ‘extreme’ views to prove that they are not ‘anti-Islamic’.

Under the Government’s counter-terror drive, universities have a duty to monitor students for signs of ‘non-violent extremism’ and block hate preachers.

He said some speakers were already being given hostile receptions on campuses, including Ukip leader Nigel Farage who cancelled an appearance at Cambridge after protests.

A petition was also set up to stop feminist Germaine Greer speaking at Cardiff because her views could allegedly offend ‘trans’ people.

Sir Vince said: ‘Once we get into the way of thinking that the best way to deal with extreme views is to suppress them, we get into very dangerous territory indeed.

(Of course the problem is, Islam is anti everything else. So how can you possibly be fair to them and, well anything else at the same time, using the ludicrous and irrational definition of ‘fair’ in use in this context of course. End public funding for all schools. That would fix it in a moment. No one would pay thier own hard earned money to send their kids to schools that teach anti-reality and anti-their own culture)

(In other news, a gathering of graduate climate scientists gathered from all continents to declare that Amon Ra is really the son of God and that already, failure to recognize that Ra is god and Jesus was a historical error has caused rising violence levels in the Islamic community world wide and more)

(The Catholic church needs to learn that to Islam, the Earth is not “god’s gift of creation” but a proving ground to see how much creation you can destroy and kill to earn your way into the sky-brothel with an unlimited credit card that never has to be paid)

4. Muslim preacher jailed after cops find invoice for £18 MILLION of ammunition on his mobile phone An imam who was found in the back of a lorry in Dover has been jailed after police discovered an invoice for £18million worth of ammunition on his mobile phone.

Abdurraouf Eshati, 29, was sentenced to six years in prison today after he pleaded guilty to terrorism and immigration offences.

Eshati, who lived in a mosque in Wrexham where he sometimes led prayers, was one of 20 people discovered in a lorry heading for France on November 30 last year.

On his mobile phone, police found a $28.5million (£18.6million) invoice from an arms supplier for the sale and delivery of 1,100 tonnes of ammunition to Libya.

5. Woman Molested During Flight From Dubai

OCTOBER 28–A woman flying from Dubai to New York City was molested by a male passenger who rubbed lotion on her body as she slept, according to federal investigators who say the suspect told flight attendants that the victim “enjoyed it because she did not resist.”

The assault occurred Monday on a 13-hour Emirates flight, according to a criminal complaint filed in U.S. District Court in 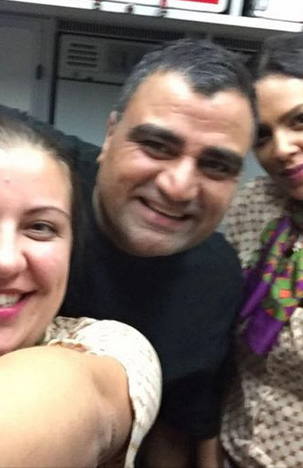 As detailed by a detective assigned to an NYPD-FBI Joint Terrorism Task Force, the victim said that she fell asleep about an hour into the flight with the aid of anti-anxiety medication. The woman was seated in row 45 next to Nadeem Mehmood Quraishi, a 42-year-old Staten Island resident. […]

Upon returning to her seat, the woman asked Quraishi where her hand lotion was. After he passed the lotion to her, she contacted crew members.

6. British lecturers accused of ‘double standards’ as they vow to boycott Israeli universities in protest at ongoing conflict with Palestinians

Hundreds of British academics have sparked outrage by declaring they will boycott all Israeli universities to show their solidarity with Palestinians.

The lecturers said the move was a protest at the universities’ ‘deep complicity’ in Israel’s ‘violations of international law’ during the ongoing conflict in the region.

The 343 university professors include some from 72 institutions including Oxford, Cambridge and the London School of Economics. Professors come from 72 institutions, including Oxford, Cambridge and LSE, have signed a pledge to boycott Israel’s universities in solidarity with Palestinians. Pictured: Solidarity protest in Morocco earlier this week

Many of the signatories, who stress they are acting in an individual capacity, are relatively obscure names in their academic fields.

(Israelis should just get stabbed and then apologize for getting blood on the knives of the muslims. Then I guess the academics would have to find another reason to boycott the one Jewish state in the world)
7. Two more boys charged with ‘insulting’ Erdogan

Istanbul (AFP) – Turkish prosecutors have charged two schoolboys aged 12 and 13 with insulting President Recep Tayyip Erdogan after they tore down a poster of him, local media reports said Wednesday.

It is the latest case in which youngsters have been hauled before the courts in Turkey on similar charges, fuelling concerns about freedom of speech under Erdogan.

The prosecutor in the main Kurdish city of Diyarbakir is seeking jail terms of between 14 months and four years and eight months for the pair, according to the Hurriyet newspaper.

It said the two were caught in May ripping down the Erdogan poster on a Diyarbakir street but defended themselves saying they just wanted to sell the paper.

“We did not pay attention to who was in the picture, we do not know who it was,” the younger defendant, identified only by the initials K.Y., told a magistrate.

(When people use that kind of a defense they have already lost. We all have. Because that defense admits that what they are accused of is a crime and they are guilty by reason of not knowing the content)

An American educator who marched for civil rights in the 1960s and advocated coexistence between Muslims and Jews when he moved to Israel died Tuesday after succumbing to wounds sustained in a Palestinian attack on a bus in Jerusalem two weeks ago.

Taking a moment to look on pop culture, here is a good expose of film maker Quentin Tarantino who is so high up Maslow’s hierarchy of needs he has a nose bleed.

Secondly, in this lecture by Dr. Tim Ball, Paleo-climatologist and general expert on weather and climate he opens with a joke:

“Q: Why did the Canadian cross the road? A: To get to the middle”

I like this because I hear Canadians of all stripes often say that the truth lies somewhere in the middle. I generally answer with the following.

“No, the truth lies where the truth is, It may be in the middle, it may be close to, at, or even past one of the extremes or it may not even be on the scale at all if the poles of the debate are absurd and bereft of any reality.”

Seeking the truth is what is important not agreement. And that is the Canadian disease, seeking agreement above the truth.