2. On the march to western Europe: Shocking pictures show thousands of determined men, women and children trudging across the Balkans as politicians warn EU could collapse in weeks

(Warn? I would have thought politicians would be dancing for joy at the thought of the end of the EU. At least the ones who care about their people and national sovereignty) 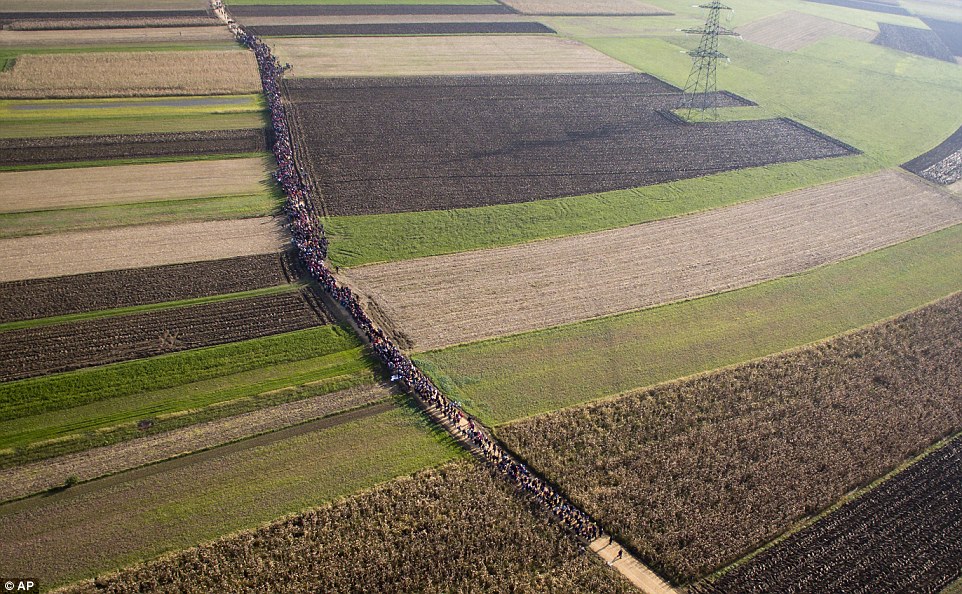 3. Some disappointed ‘refugees’ complain about waiting 4 and a half days in a refugee camp on the way to Germany.

4. Video on the Saudi royal flush of about 50 million $ worth of coke

5. More leftism allied with muslims to promote antisemitism in the US of A

(While there are many excellent books about islam and leftism, more and more I think anything by Franz Kafka is probably the best way to understand our times)

Parents in Illinois are outraged that a public school there is painting a positive picture of Islam and teaching impressionable young students that Islam bears no responsibility for the 9/11 terrorist attacks in the United States.

This is just the latest incident demonstrating a growing trend in American education to portray the intolerant, slavery-sanctioning, woman-oppressing, genocidal, and relentlessly expansionist Religion of Peace as a misunderstood force for good or as just another world religion, no better or worse than the others. The relativist, multiculturalist, pro-Sharia compliance perspective is that a few bad, weird people who just happened to be Muslims flew airplanes into the World Trade Center, the Pentagon, and a Pennsylvania field on Sept. 11, 2001, and that these jihadist extremists in no way represent the core teachings of the Koran and the whole Islamic community, even though Muslims have been slaughtering, enslaving, and otherwise subjugating unbelievers for 1,400 years.

One of the education sector’s gatekeepers Mark Halwachs, superintendent of High Mount School in Swansea, Ill., is proud to be serving humanity by presenting Islam as a positive thing that had absolutely nothing to do with the horrors of 9/11. The Kindergarten-to-8th Grade school he oversees has no plans to abandon its Islamic misinformation efforts and the teaching of revisionist history.

7. Direct Experience: The One Benefit of Accepting Muslim Migrants

(Raymond Ibrahim is awesome. I listen to a chunk of this lecture every day at some point)

A silver lining exists in the dust cloud being beat up by the marching feet of millions of Muslim men migrating into the West: those many Europeans and Americans, who could never understand Islam in theory, will now have the opportunity to understand it through direct and personal experience.

Perhaps then they will awaken to reality?

The fact is, most Western people have had very little personal interaction with Muslims.  Moreover, because Muslims in the West are still a tiny minority—in the U.S., they are reportedly less than one percent of the population—those few Muslims that Westerners do interact with are often on their best behavior, being surrounded as they are by a sea of infidels (according to the doctrine of taqiyya).

(It doesn’t really take a major Western power’s intel services to know this, but it is still nice to see them admit it, as saying an aspect of the truth like this goes against what’s allowed these days. Especially in Germany)

BERLIN – Germany’s security and intelligence agencies expressed alarm over the influx of refugees and migrants who harbor radical Islamic views and hatred of Jews, according to a Sunday report in Welt am Sonntag.

According to a security document obtained by the paper and read by top-level agency personnel, “We are importing Islamic extremism, Arab anti-Semitism, national and ethnic conflicts of other peoples as well as a different societal and legal understanding.”

The newspaper wrote that security sources warn that “the integration of hundreds of thousands of illegal migrants Germany is no longer possible in light of the number and already existing parallel societies.”

The term “parallel societies” in Germany is frequently defined as insulated Muslim communities that have little or no contact with mainstream society.

The document, called “the non-paper” because it was not signed, stated: “German security agencies…will not be in the position to solve these imported security problems and thereby the arising reactions from Germany’s population.”

9. Mark Levin on Iran Deal: Obama Legacy Will Be War

Speaking at the Values Voters Summit on Saturday, Levin accused the Obama administration of planting the “seeds of war” with the Iran nuclear deal, which Levin said was a “joke” and a ‘”sham” because it will enable Tehran to not only acquire nuclear weapons but develop their ICBM technology to allow them to “put nuclear warheads on missiles and hit our continent.”

Levin said Obama and Congress, by surrendering its treaty power, have “sown the seeds of war.”

11. This one comes a little late. A friend of ours sent me this video that a relative who was visiting a town in Austria shot. The thing is, the videographer was so horrified once she realized what they were chanting she pulls out her phone and was just in time to catch the last repetition of the English chant. After that it was a bunch of German ones that are pretty standard socialist fare. But this one chant in English is pretty damning along with pretty damn revealing.

For those interested in the many and varied ways that Obama has betrayed Israel, listen to Friday’s Marc Levin show available on various archive sites. Its quite the list and is about the first half hour of the show. After that he discusses Black Lives matters and Obama’s myth building around that leftist and islamic backed organization. But the first half hour on Israel and US betrayal is quite something.

Richard made a comment with a link to a basic short history of political correctness which is quite good.

and here is an update on the shooting in Copenhagen

6 Replies to “More miscreant migrants and minors and many mostly muslim monstrosities: Links 4 on Oct. 26 – 2015”