Few details have been made public about the girl who was captured with her 19-year-old ‘husband’ who had joined al-Qaeda as a fighter.

Leading up to the feast of the Assumption of the Blessed Virgin Mary, Catholic Churches in France have been placed under police protection and have been strongly advised to increase security in fear of a potential Islamist terror attack.

In a joint message to Catholic dioceses Tuesday, France’s Interior Ministry and bishops’ conference warned that “every religious gathering, whatever its magnitude … is vulnerable today to acts of malevolence, which may extend to terrorism.”

“Observing simple rules may allow you, without excessive distrust, to ensure your security and that of your community, while preserving the calm (and) sharing openness to others, which is needed for maintaining your faith and religious practices,” the message continued.

3. Imam of the Grand Mosque in Medina Fires Cannon at Houthis While Visiting Saudi Troops

(You hardly ever see that from priests, Buddhist monks or Rabbis)

4. ‘Pregnant after Rape’: Statues of stoned women placed in Prague by anti-Islamic groups

(And I bet he gets it. For regular Christian or secular British people, its Osman warnings when muslims want to kill them. But when it comes to Predator Vs. Alien, islam on islam violence inspired by their own doctrines, police protection will almost certainly be provided.)

It began in 2009 with his car being smashed up and the word “rafidi” daubed on it – a common Sunni insult against Shiite Muslims which refers to their rejection of Mohammed’s companions.

“They would sometimes target my house and call me and say, ‘Hey rafidi, watch your back’,” Mr Nakshwani said. “One time there was a call at midnight where they said your dad has gone out and we can see him at the supermarket. They had followed him and were watching him.”

At a Sunni-Shia “unity event” in north London, Mr Nakshwani was threatened by a group of men with long beards. One pulled a knife. “I made the decision to move to the US alone as I needed to get out and at least provide a safety net for my parents. The police didn’t really do anything — each time it was a case of ‘we will look into it’.

OKTAHA — The Council on American-Islamic Relations is taking aim at a Muskogee County survival store that has declared itself a “Muslim-free” business.

The national CAIR chapter has filed a complaint with the U.S. Department of Justice, but the federal agency has so far remained silent on the issue.

CAIR has called the sign and similar signs posted at other business across the nation “clearly illegal” and compares the signs to “whites only” signs that businesses posted to exclude African-Americans before the Civil Rights Movement. 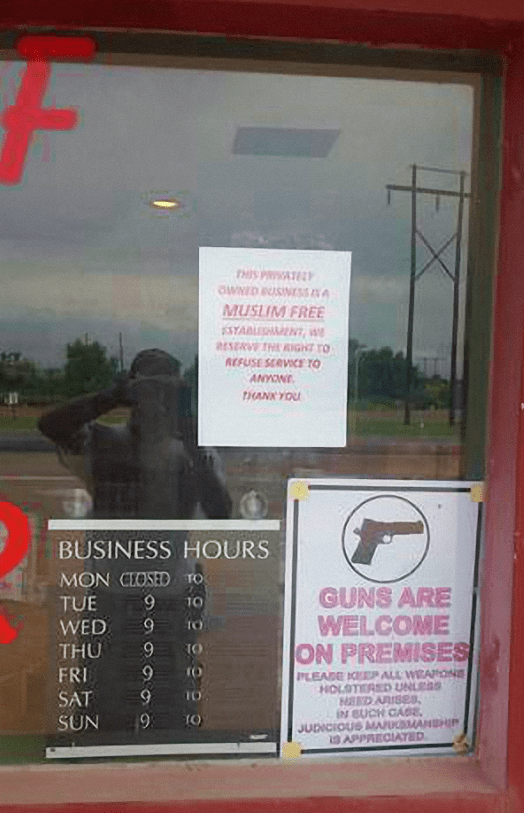 (Of course, a black person cannot convert to being white but a muslim can decide to abandon his pernicious beliefs. Saying ‘No Nazis’ is not the same as saying ‘No White people’ as much as Black Lives Matters might wish you to think so)

Thank you Buck, Richard, M., Oz-Rita and many more and more to come.