(Personally I appreciate the honesty. It beats the living hell out of ‘multi faith’ and ‘coexist’ crap)

(The BBC Headline would leave you thinking he did the attack and not that he was the victim/target of one. Which is the case) 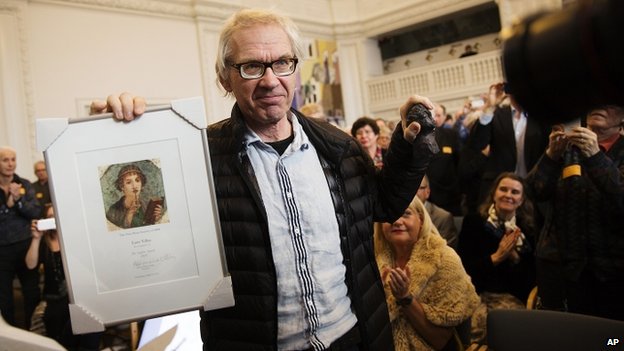 A Swedish cartoonist who depicted the Prophet Muhammad as a dog has made his first public appearance since attending a debate that was targeted in a gun attack in Copenhagen last month. Lars Vilks received a prize for courage from a free press group, at a heavily secured event in the Danish parliament. His cartoon offended many Muslims and he now lives under guard in Sweden.

A radicalised gunman with gang links attacked the Copenhagen debate and a synagogue, killing two people.

3. Here is an older short video on how Islam enriches various nations.

Hundreds of protesters tried to block access to a Salafist rally taking place in Wuppertal on Saturday, in an attempt to stop people from joining in. Salafist peacher Sven Lau, also known as Abu Adam, was among those speaking at the rally, which saw over 1,000 police deployed to keep peace between the demonstration and two counter-protests, as supporters of PEGIDA also took to the streets to march against the event.

5. Antisemitic disturbance at speech at University of Sydney

(Details at link) Andrew Bolt on this event here

6. Interesting video on Ferguson by a local city manager at this link.

7. CIA director seems to have broken from the Obama narrative

8. EPA sets its sights on BBQs

9. No police to face misconduct over Rochdale sex scandal

(Another step towards the eventual demand for a strong man)

10. Five muslims gang rape a woman on a Finish train

11. Graphic pictures of the torture and slaughter of what I think are sunni psycho jihadis by what I suspect are Shiia psycho jihadis

The Italian government went on high alert last week after threats from the Islamic State called Italy “the nation signed with the blood of the cross.”

The video threat, released with images of 21 Coptic Christians from Egypt who were beheaded this month, warned that Islamic State forces were “south of Rome,” in Libya. At its closest point, Libya is little more than 100 miles from the Italian islands of Sicily and Sardinia.

Thank you Shabnam, M., Tundra Tabloids, Wrath of Khan, Keven, Richard, Oz-Rita, and so many more.