(Reuters) – Hardline Islamist militants in northern Iraq have destroyed a collection of priceless statues and sculptures dating to the ancient Assyrian era, according to a video published online.

The Islamic State video showed men attacking the artefacts, some of them identified as antiquities from the 7th century BC, with sledgehammers or drills, saying they were symbols of idolatry.

“The Prophet ordered us to get rid of statues and relics, and his companions did the same when they conquered countries after him,” an unidentified man said in the video.

The articles destroyed appeared to come from an antiquities museum in the northern city of Mosul, which was overrun by Islamic State last June, a former employee at the museum told Reuters.

The militants shoved statues off their plinths, shattering them on the floor, and one man applied an electric drill to a large winged bull.

2. Three men wanted to fight with ISIS, attack US figures.

(CNN reporter actually refers to them as wannabe jihadis. I wonder what she thinks of the unemployment line)

3. Egypt: Series of Blasts in Cairo Kill 1, Wound at Least 7

A series of blasts in Cairo on Thursday killed one person and wounded at least seven, Egyptian security officials said, the latest in a wave of attacks using homemade explosives that authorities blame on Islamist militants.

The officials said four bombs exploded in the residential districts of Imbabah and Mohandiseen in the Egyptian capital, which is home to some 18 million people. Later, a blast outside a police station in the nearby Warraq district wounded four people, including a police conscript.

Associated Press video footage from the site of the Imbabah bomb blast showed a large pool of blood on the ground and a badly damaged car with debris covering a large area. The blast took place outside a fast food restaurant.

Germany’s top Jewish leader suggested on Thursday that Jews shouldn’t wear the traditional skullcap, or kippa, in areas with large Muslim populations but also said that hiding isn’t the right approach to concerns about anti-Semitism.

Security worries among European Jews have been stoked by recent attacks in Paris and Copenhagen. Jews in Germany generally feel safe, though security measures need to be evaluated frequently, Josef Schuster, the head of the Central Council of Jews, told rbb Inforadio.

One of Schuster’s predecessors last year suggested that Jews in Germany should make sure they’re not recognizable as Jews. 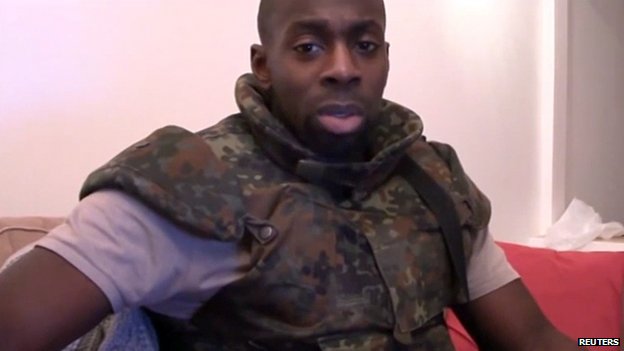 Details have emerged of footage filmed by Paris gunman Amedy Coulibaly during a bloody rampage inside a Jewish supermarket, a French website says.

He delivers an anti-Semitic rant and shouts “Stand up or I’ll kill you” at hostages, according to a transcript obtained by Le Nouvel Observateur.

During the seven-minute video he shoots dead three of his four victims.

7. Two-thirds of Quebecers polled say NO to mosques being built in their neighborhood

(A third and FOURTH mosque in Quebec is being closed or investigated now for the usual reasons. I will post the details as soon as i get the translations, hopefully sometime today) The group who helped name Mohammed Emwazi as ISIS executioner Jihadi John caused outrage today after blaming MI5 for pushing him towards his killing spree in Syria.

Asim Qureshi, research director at the rights group CAGE, described the world’s most wanted man as ‘extremely kind, extremely gentle and the most humble young person that I ever knew’.

At a press conference today Mr Qureshi was close to tears as he said Emwazi, who is linked to a string of executions of ISIS prisoners, ‘was such a beautiful man’.

Mr Qureshi said he was radicalised after the security services harassed him and alienated him because ‘the man I knew would never hurt a single person.’

He said: ‘When are we going to finally learn that when we treat people as if they’re outsiders, they are going to feel like outsiders and they will look for belonging elsewhere.’

9. US citizens warned not to shop in Jordan after ‘credible’ terror threats

The US embassy in Jordan’s capital, Amman, has warned American citizens against visiting the country’s posh shopping malls after receiving “credible information” that they may be targeted by terrorists.

“Extremist groups have repeatedly expressed interest in attacking so-called soft targets, such as malls and restaurants, in Jordan,” the US embassy said in a statement. “The US Embassy has received information of a potential threat against high-end malls in Amman.”

Amman has recently stepped up its role in the US-led military campaign against Islamic State (also known as ISIS, or ISIL) in Syria after the jihadists burnt alive captured Jordanian pilot Mouath al-Kasaesbeh and released a video showing his grisly death.

10. Jihadi John’s old university was a ‘hotbed of radicalism where students celebrated 9/11’, claims ex-pupil – and hate preacher was even due to speak there TONIGHT Jihadi John’s former university was a ‘hotbed of radicalism’ where students ‘celebrated 9/11’, it has been claimed.

A former student has lifted the lid on his time at the University of Westminster – as it’s also revealed a talk by a Muslim hate preacher has been postponed due to ‘security concerns’.

Haitham al-Haddad was set to speak tonight, but the event will not go ahead as planned after it was revealed ‘Jihadi John’ studied computer programming at the university.

Today, the terrorist was named as a university graduate from London who was able to flee to Syria despite being on an MI5 terror watch list.

Thank you Draculea, M., and all who sent in material including Wrath of Khan and many others. More to come.

I believe that my email server is under attack so I am getting emails sporadically or not at all or sometimes after days. Once I have established a new email address I will post it for people here but for now, I have redirected comments on the site to go to a new one I am trying out. This means that I should be getting any comments reliably, but if you send me an email directly for the moment I may not have gotten it.

This problem goes back a few days now. So for those of you that have anything important you want me to see or post and sent me directly or, until this morning, in the comments, please re post in comments if it hasn’t appeared or you expected an answer and didn’t get one. As a consequence, I am more disorganized than even usual recently and losing track of who sent what when. But over the course of the next 48 hours I hope to sort all that out.

Thank you again for your patience and patronage of this site.

30 Replies to “Islam must destroy as its act of creation. Its contribution is the obliteration of the very memory of other peoples. Links 1 on Feb. 26 – 2015”