1. More on the parking issue that so far has led to three deaths in North Carolina

Belgium doesn’t only hold the record for jihadists in Europe, it is also the European country with the highest suicide rate. The most notorious suicide is the Nobel Prize laureate in Medicine, Christian de Duve, who, two years ago, killed himself in front of his four children.

Six suicides a day. With a suicide rate estimated at more than 20 per 100,000 inhabitants, Belgium breaks all records in Western Europe. The world average is 14.5 per 100,000 inhabitants. Suicide is indeed the first cause of mortality among Belgians between 25-44 and the second leading cause, after vehicle accidents, between 15-24.

[…] At the same time, Belgium adopted the most radical form of multiculturalism that Europe has ever known. In 1974, the Belgian government officially recognized the Islamic religion. The first result of this recognition was the adoption, in 1975, of the inclusion of the Islamic religion in the school curriculum. Muslims in Belgium are 75 percent fundamentalist.

3. Now and again, someone sends me something which makes me realize that at some level, we just may deserve the mess we are in. If not all of us, at least California

Al-Khansa, the all-female Islamic State (IS) brigade, have arrested and punished 15 women in Mosul.

They were arrested on Sunday in the Salamiya neighborhood of Mosul.

Mamuzini said al-Khansa militants disfigured the women by pouring acid on their faces.

“They have implemented this punishment so that other women in the city will never consider removing or not wearing the niqab,” he said.

Last month members of IS executed a number of women by stoning. They were accused of adultery.

OTTAWA – Days before Awso Peshdary was arrested and charged as a key figure in a national terrorism investigation, he was teaching children how to shoot hoops in an Ottawa public school gymnasium.

Peshdary, who was described by CSIS spies as a talent spotter and recruiter for a convicted terrorist when he was first arrested in 2010, was most recently employed as a youth services worker with the Pinecrest-Queensway Community Health Centre.

(Video at site is very good) 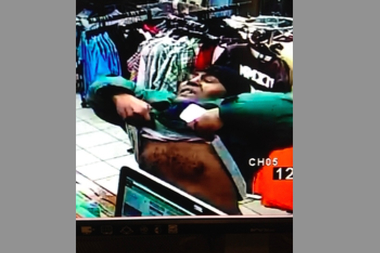 QUEENS — A religious robber asked a Jamaica cellphone store worker not to report a holdup, claiming they were both Muslim as he held up his shirt to reveal the word “Islam” tattooed on his chest, police said.

According to investigators, the suspect stole nearly $800 from 111 Wireless and More last December and even shook the victim’s hand before leaving during the bizarre incident.

Thank you M., Yucki, TL., Richard and a host of others. Clearly the frequency of Islamic, shall we say, ‘anti-social acts’ are increasing in tempo, as is the attempt to disguise them as something other than that, while CAIR does its level best to turn one angry man’s frustration at a local parking dispute in which he went triple overboard and shot three people, into a much needed by muslims, victim of islamophobia.

Meanwhile, a Jewish diner in England had its windows knocked out by people throwing rocks which is being called, at last look, a random act of vandalism.