A translation of an article from German media for 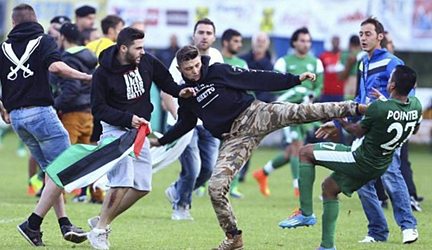 The translated op-ed from Die Presse:

That Could Have Almost Become a “European Kristallnacht”

Anti-Semitic mobs are venting their rage in Europe’s big cities, and that is less of a concern for so-called Peace Project Europe than the light bulb question.

The few, old denture-clacking Nazis still alive must have experienced a kind of spiritual revival of the Nuremberg Rallies* in recent days, when they rolled up to the TV in their wheelchairs to watch the news. Because there, in the great cities of Europe — Berlin, Paris and London — anti-Semitic mobs were moving through the streets as if it were 1938, attacking local Jews and Israeli tourists, trying to destroy synagogues and going after Jewish businesses. “Jew, Jew, cowardly swine/Come on out fight alone!” the thugs chanted, under the eyes of German police who not only made no move against them. but even loaned the rioters a megaphone, and immediately an Islamic Berlin hate preacher segued into calling for Jews to be killed: “Jews to the gas!” In Salzburg’s Bischofshofen, anti-Semitic hooligans actually attacked Israeli soccer players. The fact that in recent months 700 French Jews have emigrated to the rocket-plagued south of Israel testifies just how protected Jews feel in Europe in the early 21st century. It is highly probable that, without massive police presence, there would have been burning synagogues, smashed windows in Jewish businesses and a few lynched Jews in the EU last week. That week, Europe was not very far from an EU-wide Nazi pogrom night 2.0 — a kind of domestic market for anti-Semitism, so to speak.

One or the other of the surviving NS veterans, in a transport of joy, must have thought: “Oh, that I have been privileged to see this!”