I posted an article yesterday with a story about a couple of people who baconated a mosque and got a year in jail for their efforts even though the only damage done was one offended janitor. And as he was a muslim, we can never know exactly how offended he really was as they just don’t make instruments that sensitive at the current state of technology. (Look for a new iPhone app and sensor coming out with the iPhone 9)

Since I wrote that article a few more data points have come in. I thought it would be a worthy public service to anyone who is considering visiting the newly minted sharia state of Anglostan to let them know what they can actually expect from the judicial system, rather than what they might fondly remember as the former basis of the British judicial system, clearly no longer in effect. It is my deep hope that the good folks at Liberty GB will actually embark on a proper study of comparative sentencing, as this is more than a matter of curiosity, it is a matter of central dogma of the state itself. But until they do, and until they publish their results, here are a few interesting cases from memory and with the help of Liberty GB’s Tim Burton.

1. Muslim girls kick the crap out of a white British girl calling her racist epithets such as “White slag” and worse, are let go scot free by a judge who determined that because in theory muslims aren’t supposed to drink, that these girls therefore must not be used to drinking, and therefore this behaviour was the consequence of drinking while muslim. Or or something very much to that effect.

2. This link is a kind of analysis of this issue as well, but details several very similar ‘crimes’ and punishments depending on the religion of the perpetrator. It is worth popping over and having a look. Below, the immediately relevant bit however:

3. Racist ex-soldier who stuck a pig’s head to mosque gates in ‘revenge’ for extremists burning poppies is jailed for four months

(Part of the trick to unfairly jailing those who are against Islamic manifest destiny appears to be labeling them as racist. Adding a thought crime to the actual victimless actions seems to be enough to allow this kind of skewed sentencing it seems)

This guy actually killed someone while driving, apparently while texting someone. He was sentenced to 12 WEEKS in jail and told he would serve 6 weeks of them in custody, the rest at home. Subsequent to that he railed that it was a Jewish conspiracy that he was sentenced to any time at all. I’m not sure how much remorse he felt for the kafir he killed though. But to be entirely fair, its quite possible that in this instance it is not favoring muslims so much as its a classic example of both British and Canadian political class elitism. Say what you want about the USA but at any given time they have over 100 elected representatives in jail for committing crimes while Canada, far more corrupt than the US is, never has any politicos been put in custody at all and as far as I know never even had to give back stolen money. So it could be just that at work in Lord Ahmed’s case.

But I doubt it. Lord Ahmed served only 16 days of his sentence behind bars. His victim as far as I have been able to determine, is still dead. 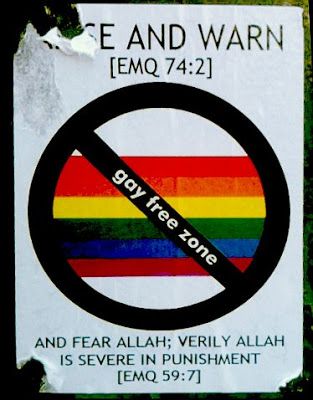 An 18-year-old Muslim man has been fined for posting homophobic stickers around London’s East End.

Mohammed Hasnath, 18, of Leamouth, Tower Hamlets, was arrested last month at his homeand represented himself in court today. He pleaded guilty to the offence and was fined £100 plus £85 costs and a £15 victim surcharge.

To be clear, a muslim who put up posters claiming that no homosexuals are allowed in this area, and which has a pretty open subtext, no actually direct text suggesting punishment for being homosexual, and if one reads the islamic punishment for homosexuality, its in fact death. This guy got a £200.00 fine. He was making a general threat to punish people, possibly with death, for being gay, which is something which is not only legal in England but more and more looks like its mandatory.

Meanwhile, 2 people, a teenager and a man in his 30s are going to do a year in jail for offending a muslim at a mosque with a couple of strips of bacon.

If you are planning to visit Europe may I suggest Bulgaria, The Czech republic or Denmark? As far as I can tell, those nations still have remnants of the enlightenment and may allow you to enjoy basic individual liberties and get home without a criminal record.

Thank you Tim Burton of Liberty GB for the help on this as well as James from the comments and ML on the original post.

In the dock at Willesden Magistrates Court were Mohammed Khalfia and Mohammed Jawad, both from Wembley, Haider Al-Fardan from Kingsbury and Aimen Mohamed from Colindale.

[…] the court heard from two Jewish women and a 14-year-old boy who said they had been targeted and that the accused had shouted “Oi, Jews,” and “f***ing Jews” as they hurled the eggs.