1. Anyone remember how the original Twin Towers bombers where caught? At least some of them? They tried to get their deposit back on the van they rented, then filled with explosives, then detonated in the parking lot of one of the towers. Then you have this guy.

2. Yesterday, several videos of a protest in Bulgaria against a mosque was posted.

In one of the videos was a sign. Thanks to GoV and RR I have a translation: 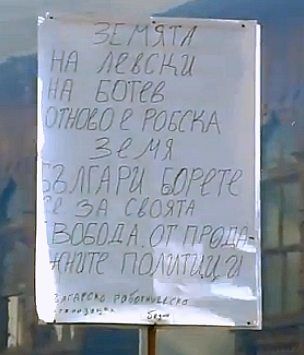 The sign reads “The land of Botev and Levski (two most prominnt revolutionaries against the Turkish rule) is a land of slaves again, Bulgarians get to struggle with the corrupt politicians” – wide meaning of this message: the “ruling coalition now is dependent ot the Turkish ethnic party”, but the slogan is not very specific.

GoV has this report here

3. Dane-o-tard charged with terrorism related charges for the second time.

Said Mansour, a Danish/Moroccan citizen whowas previously convicted on terror charges has once again been charged by Copenhagen Police with inciting terrorism. Mansour is often known as the ‘Bookseller from Brønshøj’ for his work in publishing terrorist tracts.

4.  Danish PM declines offer to be part of official opening of new mosque

(Clever woman. She must get it)

Thank you UK Pete, M, Fjordman and all who sent these in. More to come.