A car bomb exploded outside a building housing the Swedish and Finnish consulates in the eastern Libyan city of Benghazi on Friday, badly damaging it but causing no casualties, Libyan and Swedish officials said.

2. More on the attack on Tommy Robinson in Luton

She said: “Three men came out of the chicken shop and started shouting at Tommy and the film crew. Then they went for him and attacked him, they were hitting him and he was just trying to get away saying he didn’t want a fight.

3. Home made banner hung on the mosque at Poitiers. Article and video are in French but as far as we can tell so far, all they say is, a banner was hung from the mosque itself in the French town of Poitiers which reads: “Islam Out” and they are investigating. They have a list of possible suspects. In the video, the imam claims it was a racist act, somehow confounding several hundred years of evolutionary biology. 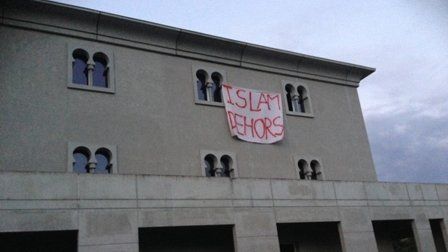 4. Could there be a double standard in the way Christians and Muslims are treated in the USA? Story here.

5. Nice to see North Korea becoming interested in what appears to be circa 1800’s US style square dances. The only thing is, if you don’t follow the caller just exactly right, its three generations in a gulag.

Thank you M, Richard, Fjordman and everyone who sent in material today. If anyone has not seen the Swiss clip I posted late last night, please do watch it. A great moment is where a muslim man humiliates two muslim women by treating them like children and telling them not to speak to a reporter and taking over the interview to explain how islam does not humiliate women.