(I would be interested in seeing any BBC coverage of the massive and lethal attack on Hindus yesterday in Kashmir, or recently when Muslims in Bangladesh destroyed Buddhist temples etc. Any links appreciated) 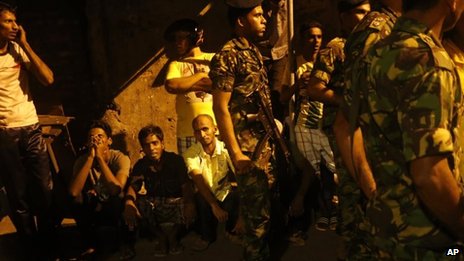 A Buddhist mob has attacked a mosque in the Grandpass area of the Sri Lankan capital Colombo, leaving at least five people injured.

Buddhists and Muslims clashed after the attack, and police imposed a curfew in the area.

2. Before Attack Govt. Asked Muslim Ministers To Shut Mosque Till After CHOGM

Details are now emerging of a top cop approaching two senior Muslim Ministers last afternoon (10 August) to request them to close the new makeshift mosque in Grandpass until after the end of the Commonwealth Heads of Government Meeting scheduled to take place in Colombo in November, Colombo Telegraph learns. Western Province Senior DIG Anura Senanayeke had made the request although the motive of the senior police official is not clear. CLICK TO STORY:

Police curfew imposed in the Grandpass area until 7 am tomorrow after two groups clashed in the area following an attack on a Muslim prayer centre in the area.

Armed forces have been deployed in Grandpass after a well known masjid or Muslim prayer centre in the area was attacked this evening.

(Damn you have to love those Buddhists!)

4. Update: Buddhist Monks Led Mob Attacked Muslim Prayer Centre: Bells In The Nearby Buddhist Temple Rang Out Before The Attack

Residents say the temple bells in the nearby Buddhist temple rang out before the Grandpass Muslim Prayer Centre attack took place this evening. The residents said the crowd of about 10 monks and at least 50 people gathered at the temple. Ravana Balaya has denied involvement in the attack and residents claim many of the monks were from the area temple.Upto five people injured including two policemen so far.

The Ravana Balaya group called for its relocation within one month.  Security forces personnel have now been stationed around the mosque to assist the police to keep calm.

Armed forces have been deployed in Grandpass after a well known masjid or Muslim prayer centrein the area was attacked a short while ago. Upto five people injured including two policemen so far, according to reports onsite.

According to eyewitnesses about 10 Buddhist monks suspected to be from the Ravana Balaya group, allegedly attacked the mosque despite the police guard.

The area remains tense after a few houses were also attacked on the Swarna Chaitya road in Grandpass where the mosque is situated.

The Ravana Balaya group called for its relocation within one month.  Security forces personnel have now been stationed around the mosque to assist the police to keep calm.