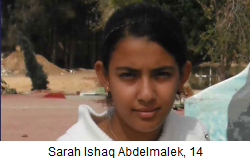 (AINA) — Hundreds of Christian Egyptian girls having been abducted and forced to convert to Islam and marry Muslim men since the 2011 Egyptian Revolution. But the case of 14 year old Sarah has become symbolic, bringing to confrontation Muslims groups, whose members are implicated in the kidnappings, and the Coptic Church and human rights organizations.

On Sunday, September 30 Sarah Ishaq Abdelmalek, born on August 1, 1998 in the town of el-Dabaa, 130 kilometers from Mersa Matrouh, was on her way to school with her cousin Miriam, when they stopped at a bookshop. Miriam went ahead of Sarah to school, leaving Sarah behind. Sarah never made it to school and no one has seen her since then. Her father was hesitant at first to contact the authorities for fear of harm to his family and his other children by the Salafi Muslims, who have a large presence and influence in Mersa Matrouh and Alexandria. He finally filed a report with the police on October 20, accusing 27 year old bookshop keeper and Salafist Mahmoud Abu Zied Abdel Gawwad, a married man and father of children, of abducting Sarah and marrying her against her will (AINA 11-2-2012).

“Sarah was smuggled across the borders to Libya with the help of the Interior Ministry,” said Ebram Louis, founder of the Coptic non-governmental organization Association of Victims of Abduction and Enforced Disappearance (AVAED), which handles cases of abducted Coptic minors. Louis blamed the interior ministry for all the disappearances of Coptic minors, saying the ministry colludes with the Muslims.

The recently elected Coptic Orthodox Pope Tawadros II said the kidnapping and forced conversion of Sarah is a “disgrace for the whole of Egypt.” During a meeting with a delegation of the Journalists Syndicate Council at Anba Bishoy Monastery in Wadi Natrunon on November 12, he said “Can any family accept the kidnapping of their daughter and her forced conversion?”

The Pope dismissed the term “emotional ties” for what is happening among young men and girls from different religions, cited as the apparent cause of conversions by the Salafists. In an interview with Al Ahram Daily he said it is “sentimental coercion of girls who have not reached adulthood.” The Pope said it is now common among Coptic families not to send their daughters to school because of fear kidnapping and forced conversion. Anba Pakhomios, the bishop of Mersa Matrouk, said Coptic families are increasingly choosing not to send their girls to public schools, making them study at home and only go to school during the examinations.