Regular readers are familiar with Gavin Boby of Law and Freedom. For the past couple of years Gavin has been tireless in his opposition to the construction of new mosques in England through action in local planning councils.

Yesterday The Sunday Times published what it must have believed was a hit piece on Gavin. They accused him of “ideological hatred of Islam” and connected him with “the far-right blog Gates of Vienna”.

I can’t show you the whole piece, because it’s behind a paywall. But here’s a screen shot of the top of the article by Richard Kerbaj and Robin Henry: 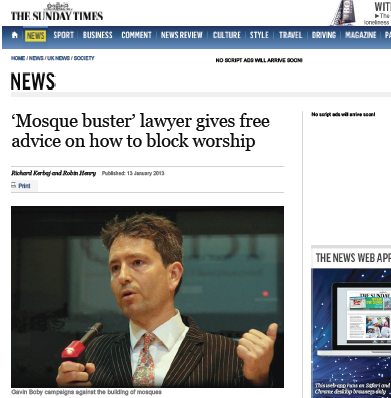 And a brief snip from the opening of the article:

A SELF-STYLED “mosque buster”, who boasts that he has blocked plans for 16 mosques across Britain, was once linked to the far-right English Defence League (EDL) and claims that Islam encourages paedophilia, sexual abuse and pimping.

Gavin Boby, a planning lawyer from Bristol, urges his followers to undermine planning applications for mosques by raising their opposition with councils.

Boby, 48, runs a planning consultancy but under the banner of the Law and Freedom Foundation he also provides a free legal service for those who oppose mosque developments…

More than that I dare not quote, for fear of exceeding “fair use” and violating the copyright of The Sunday Times.

Interestingly enough, the Times itself seems to be a bit slack about copyright.

The photo at the top of the article looked familiar to me. It was obviously taken last July at the Brussels Conference sponsored by ICLA in the European Parliament.

With a little bit of digging, I uncovered the original. It was taken by my good friend Steen of Snaphanen, and posted on his blog last December.

If you look at the full-sized version of the photo, you’ll notice that it is clearly watermarked with “Foto © Snaphanen.dk”.

Trivialities such as copyright are no obstacle to The Sunday Times, however. The editors must have passed the photo on to one of their graphics specialists, who edited out the pesky watermark. Look at the two detail shots below — on the left you’ll see Steen’s original, and on the right is a blowup of the Times’ edited version: 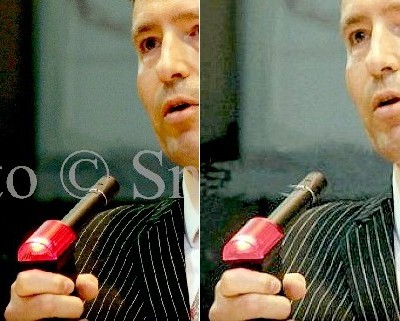 You’ll notice that the graphics editor was a bit sloppy, and left in a fragment of Steen’s © to the left of the microphone.

The evidence is clear. Even an amateur like myself can see that the venerable Sunday Times stole that image from Steen. 7 Replies to “The Sunday Times: Theft, and a Hatchet Job Against Gavin Boby”