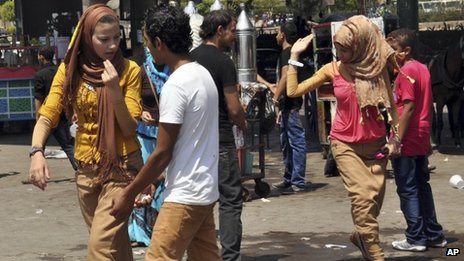 Campaigners in Egypt say the problem of sexual harassment is reaching epidemic proportions, with a rise in such incidents over the past three months. For many Egyptian women, sexual harassment – which sometimes turns into violent mob-style attacks – is a daily fact of life, reports the BBC’s Bethany Bell in Cairo.

Last winter, an Egyptian woman was assaulted by a crowd of men in the city of Alexandria.

In video footage of the incident, posted on the internet, she is hauled over men’s shoulders and dragged along the ground, her screams barely audible over the shouts of the mob.

It is hard to tell who is attacking her and who is trying to help.

The case was one of the most extreme – but surveys say many Egyptian women face some form of sexual harassment every day.

Marwa, not her real name, says she worries about being groped or verbally harassed whenever she goes downtown. She says it makes her afraid.

“This is something that scares me, as a girl. When I want to go out, walking the street and someone harasses or annoys me, it makes me afraid.

“This stops me from going out. I try to be excessively cautious in the way I dress so I avoid wearing things that attract people.”