Anyone think this guy has a restaurant that makes it worth it? 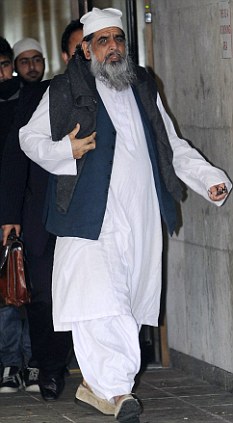 A Muslim preacher who tried to strangle his 16-year old daughter after she refused to enter into an arranged marriage with her cousin has avoided jail.

Abid Hussain, 56, grabbed the neck of Rabiyah Abid and said: ‘If you don’t follow my rules I will kill you’ after she rejected his plans for her to wed.

Hussain also left the teenager in fear of her life as he battered her about the head at the family home above the mosque he runs at Longsight, Manchester.

The father-of-five had snapped after discovering Rabiyah refused to follow strict Islamic tradition and embarked on a romance with a student she had met on Facebook.

She had previously run away from home to be with him and even helped police draw up a court order banning her father from forcing her into the marriage.

At Manchester Crown Court yesterday Hussain was convicted of assault and making threats to kill. He admitted his daughter’s conduct had ‘brought shame’ on his family and caused him ‘mental torture’ but denied wrongdoing.

His two sons Nawab Uddin, 23, and Bahaud Uddin, 21 were also convicted of assaulting the teen.

10 Replies to “Muslim preacher who tried to strangle his daughter, 16, for refusing an arranged marriage to her cousin spared jail”