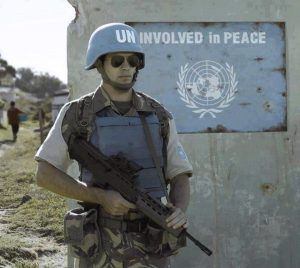 GENEVA – In the past decade, the U.N. Human Rights Council elected Col. Muammar Gaddafi’s Libya as chair, hailed Sri Lanka’s “promotion and protection of all human rights” after its army had killed thousands of civilians, and convened an emergency session to lament the death of Sheikh Ahmed Yassin, founder of the Hamas terrorist organization.

Even so, historians will now have to decide whether the U.N.’s flagship human rights body is about to sink to a new low.

According to a U.S.-sponsored and EU-backed draft resolution that was debated today during informal meetings at the council in Geneva, the murderous regime of Bashar al-Assad is a declared candidate for a seat on the 47-nation U.N. body, in elections to be held next year at the 193-member General Assembly.

As part of the U.N.’s 53-nation Asian group, Syria’s candidacy would be virtually assured of victory due to the prevalent system of fixed slates, whereby regional groups orchestrate uncontested elections, naming only as many candidates as allotted seats.

That’s how non-democracies like China, Cuba, Russia and Saudi Arabia won their current seats, and how Pakistan and Venezuela are about to do the same.

Fears that Syria will indeed win—in a 2013 election for a position starting the following year—appear to have mobilized the U.S. and the European Union into taking the unprecedented action of asking the council to declare in advance that a candidate country, in this case Syria, be declared inherently disqualified to join its ranks.

In a strongly-worded resolution condemning the Syrian government for committing atrocities, slated for a Friday vote, paragraph 14 “stresses that the current Syrian government’s announced candidacy for the Human Rights Council in 2014 fails to meet the standards for Council membership” as set forth in its founding charter. That Syria is a contender came as a major revelation.

Shockingly, the perfectly reasonable attempt to keep Syria away from the world’s highest human rights body was met with strong resistance.

In today’s discussions, Cuba declared itself “totally opposed,” and demanded the paragraph’s deletion, a position quickly echoed by China. It was for the General Assembly to decide whom to elect, insisted Havana.

“We don’t like to speak to country candidacies,” added Egypt. Brazil argued that the reference to council membership was “outside the scope of the resolution.”

Russia insisted that no action be taken until Assad’s candidacy was formally submitted. Likewise, India believed the subject was “premature.”

However, as noted by the Americans, the public record shows otherwise. Syria actually had declared its official candidacy in early 2011, around the time the killings began.

It was only after UN Watch revealed Assad’s bid and organized an international coalition of human rights groups to fight it that Western democracies rallied to the cause, applying heavy pressure on the Asian states. At the last minute, on May 11th last year, a deal was announced: Kuwait would replace Syria.

Assad’s U.N. Ambassador Bashar Ja’afari made clear, however, that his country had agreed only “to reschedule the timing of our candidacy,” saying they would run instead in the 2013 elections, for a three-year term.

His Kuwaiti counterpart corroborated the pact. “We agreed to exchange terms,” said Ambassador Mansour Ayyad Alotaibi. “Syria is not withdrawing,” he told reporters.

But once Kuwait’s entry ended the controversy, no one—until now—had paid any attention to the fact that Syria would actually run again soon.

Though it’s truly difficult to imagine how the Asians could, in face of all the horrors taking place, allow Syria to be one its candidates, the reality is that they did so just last year, changing their minds only after massive lobbying.

What is more, this past November Syria won unanimous election to two human rights committees of UNESCO, the U.N.’s Educational, Scientific and Cultural Organization.

Despite the suspension of Assad’s regime from the Arab League, the very same nations’ UNESCO ambassadors in Paris refused to allow objections to a country’s human rights record to interfere with their backroom rotation deals—lest one day the precedent be used against them. They nominated Syria, and it was duly elected.

After UN Watch campaigned against this obscenity, too, the U.S. and Britain attempted remedial action. Yet despite their best efforts, the old boys’ club could not be convinced to expel one of their own. Syria remains a full member of UNESCO’s committee to judge human rights complaints, and of its committee dealing with human rights organizations.

And unless America’s laudable effort succeeds, Syria may soon win a seat on the world’s highest human rights body as well.