Extremist content – Interior minister made to close down salafist websites 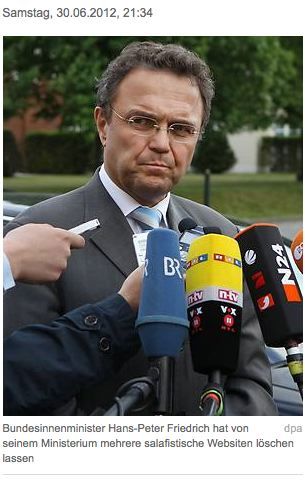 The german interior minister has in the last few days forced the closure of two islamist webpages from the Internet. The platforms represented  the salafist groups, made already in illegal in June. But the deletion process proved to be more complicated than at first thought.

Following the illegalization of the radical salafist group “Millatu Ibrahim” on the 14th of June, the websites millatu-ibrahim.com and salafimedia.de, also belonging to this group, were also closed down. This is what the newspaper “Welt am Sonntag” reported, citing a spokesperson from the ministry.
“The websites served as platforms for jihadi propaganda. Videos and audios from salafist preachers and documents with extremist content were offered for downloading. As an example, an article from Salafimedia had the following title: “join to receive the heritage of paradise”, and a predication had this title: “Faith demands sacrifice””.
The process of deletion was complicated

In June 14, and after a decision taken by the German Federal Interior Ministry, raids took place against the illegal groups “Millatu Ibrahim”, “Die Wahre Religion” (The True Religion) and DawaFFM. During this raids, the homes of followers of these groups were searched, a community mosque was closed in Solingen, and PC-s, hard-disks and documents were confiscated.

5 Replies to “Germany: Extremist content – Interior minister made to close down salafist websites”