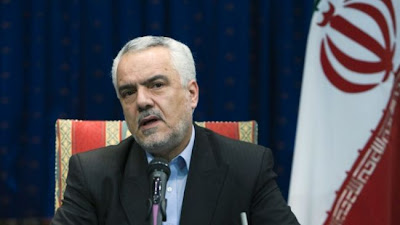 Iran’s first Vice President, Mohammad Reza Rahimi, told a United Nations conference in Tehran on Tuesday that the Talmud instructs Jews to suck the blood of non-Jewish infants, and blamed the Talmud for the spread of drug addiction around the world.

Mr. Rahimi, second in line to President Mahmoud Ahmadinejad, said the Talmud teaches to “destroy everyone who opposes the Jews.”

The “Zionists” are in firm control of the illegal drug trade, Mr. Rahimi said, asking foreign dignitaries to research his claims. “Zionists” is Iran’s ideological term for Jews who support the state of Israel.

“The Islamic Republic of Iran will pay for anybody who can research and find one single Zionist who is an addict,” Mr. Rahmini said. “They do not exist. This is the proof of their involvement in drugs trade.”

What made his remarks even more striking is that Iran’s fight against illegal drugs is one of the few issues on which the Islamic republic can count on Western sympathy. Iran’s battle to stop the flow of drugs coming in from neighboring Afghanistan has often been mentioned as a potential field of cooperation during negotiations over the country’s nuclear program.

Mr. Rahimi, who spoke after Mr. De Leo, told stories of gynecologists’ killing black babies on the orders of the Zionists and claimed that the Bolshevik Revolution in 1917 was started by Jews, adding that mysteriously no Jews died in that uprising.

He also said the Talmud teaches Jews to think they are a superior race. “They think God has created the world so that all other nations can serve them,” he said. Halfway through his speech, Mr. Rahimi said there was a difference between Jews who “honestly follow the prophet Moses” and the Zionists who are “the main elements of the international drugs trade.”

The reports have described diplomats who heard the tirade as being ‘shocked,’ but the conference continued.

link to original in Farsi: