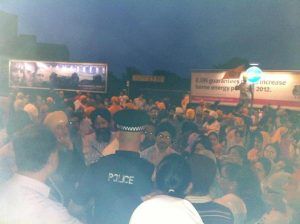 The British city of Luton saw a large protest by Sikhs last week after the alleged rape of a Sikh girl – reportedly in her teens.

The alleged attacker, British Pakistani Anan Majid Basharat, 19, subsequently appeared at Luton Magistrates Court, charged with assault. He pleaded not guilty and was granted bail on condition that he did not reside in Luton while awaiting trial, and that he adhered to a curfew.

Both the attacker and victim are students at Icknield High School.

Pakistan’s Daily Times reported that, “hundreds” of the Sikhs protested outside Luton Police station following the allegation of rape. The protest, which was called at short notice, is seen as a “warning shot” to the Muslim community of Britain to “get its house in order.”

Several cases of child grooming and rape by gangs of Muslim men have been prosecuted in Britain over the last year. However, it is now widely accepted that police routinely ignored sexual violence by Muslim gangs for several decades, due to political correctness. Although sexual predators are of ethnicity and religion, Muslim men with Pakistani roots make up the vast majority of perpetrators in this specific crime.

Sikhs and Hindus recently criticized the British media for describing grooming gangs as “Asian,” not least of all as both Sikh and Hindu girls have been targeted for grooming by Muslim gangs in Britain. There have been no reported cases of Sikhs or Hindus involved in grooming.

Although the protestors in Luton were mostly male, some Sikh women also turned up to protest what they see as police negligence in the case.

The parents of the alleged rape victim had complained to the local police authority on four separate occasions that their daughter was being “groomed” for sexual abuse. As with many other such cases, however, the police authority failed to take any action, leaving the girl and her family vulnerable.

The Sikh community decided to protest outside Luton police station after convening a meeting at Guru Nanak Gurdwara on Tuesday evening. Between 30 and 40 members of the English Defence League (EDL) also joined the Sikh protestors.

The EDL describes itself as a movement opposed to “radical Islam.” It has a large white working class membership, and according to a recent article in the Asian Tribune, the EDL also has strong “grass root support” that includes “members from every Asian country.” The EDL also has a number of ethnic and religious minority divisions, including a Sikh division. 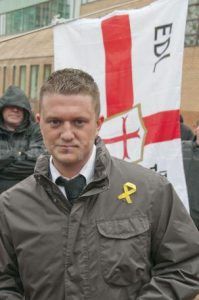 “The Sikh community strongly believes that this attack [on the Sikh girl] was racially motivated,” says the Sikh website Panthic.org, “and is one of the many and growing body of evidences of activity within the Muslim community, however, small or isolated, which preys upon vulnerable Sikh females in an organised way and actively encourages this.”

Although unreported in the mainstream media, threats have been made against the girl’s family, with the mother and sister of the victim being threatened with rape if they complained to the police. Videos of the victim were also reportedly made, and the family have also been threatened that these will be posted on Sikh websites in an attempt to have her outcast from the Sikh community, if they speak out.

“What has happened to her… threatening to rape her family – threatening to expose these videos – it’s happening all across the country,” says Robinson. “I know another twenty English girls in this position.”

Panthic.org also accuses the police of failing “to handle the incident properly” because they are scared of “Pakistani radicals.”

“the reason the police don’t deal with these crimes is because [the attacker] is a Muslim. If a Muslim family went to the police[…] then the police would be kicking off doors,” Robinson believes, “and that’s the two-tier system we’re up against” in Britain.

13 Replies to “EDL on grooming of Luton Sikh girl”