Once again, the MSM, the New York Times being the most MSM of them all, utterly fabricate the narrative and tell their own story at the expense of the truth. The facts are that those who demonstrated against the salafists are in favor of freedom of speech, of equal treatment for women and for all before the law. What we should call ‘classical liberals’ and what in the 1950s would have likely been called ‘commie pinkos’ by some on the right in the US. The “far right” the media is constantly referring to, should more correctly be applied to a group of people that feel:

1. Women are made by Allah as deficient and the testimony of 2 women is barely equal to one man

2. Hatred of Jews is central dogma

3. That scriptural law should be supreme at the expense of all liberal and democratic methods of governance.

In other words, the Muslims. 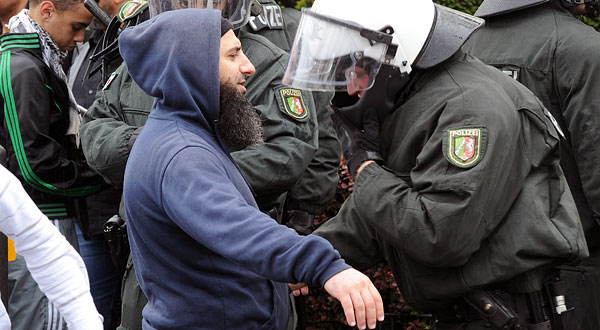 Police searched a man who attended a demonstration called by a Muslim Salafist movement against the small extreme-right party, the Pro-NRW, in Bonn on May 5.

BONN — The people who live in the trim row houses with well-tended gardens that line the streets of this spa town along the Rhine like to boast of their city’s tolerance as the onetime home to dozens of foreign embassies, when Bonn served as capital of West Germany.

Click to continue this partial white wash of premeditated Salafist rioting in Bonn Germany in may to find the odd gem like this:

“But at some point, she noticed several young men stuffing their pockets with the small slate chips that line the garden along her exterior wall.

“I went over to fuss at them and one turned and threw the stones back in my face,” she said. Her husband pulled her inside to safety.”

10 Replies to “A half truth is the damnedest of lies. The NYT attempts to write on the Bonn Riots in May”