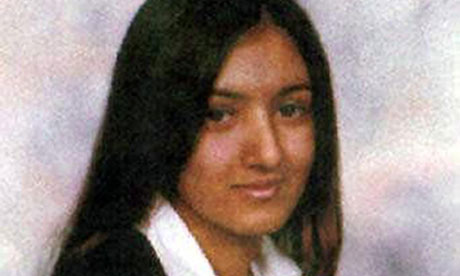 Shafilea Ahmed’s body was found near a flooded Cumbrian river in 2004. Photograph: PA

A teenager told police she watched her parents suffocate her sister to death by forcing a carrier bag into her mouth so she could not breathe and placing their hands over her face, a court heard on Tuesday.

Alesha Ahmed, now 23, said she watched her parents “acting together” during the murder of her older sister, Shafilea Ahmed, 17, on 11 September 2003, Chester crown court heard. She said that later that night she saw her father with a large object wrapped in binbags and brown tape – which she assumed was Shafilea – and which he drove off with in a car.

The prosecution barrister, Andrew Edis QC, said Alesha watched as her parents suffocated her sister at their home in Warrington, Cheshire on the night she went missing. He said: “Both parents acting together got a carrier bag that they forced into her mouth. Their hands were over her face, closing her airways so she couldn’t breathe.”

In the immediate aftermath of Shafilea’s murder, Alesha “talks about looking into the kitchen and seeing her mother sorting through a pile of blankets and sheets. She saw her mother with black binbags and two rolls of wide brown tape and some black tape,” Edis said.

Then she looked out of the kitchen window and saw her father with a large object wrapped in binbags and brown tape, “which she assumed was the body of her sister”, said Edis. Soon after, at around 10pm, she is said to have heard a car driving off with her father at the wheel and her mother remaining in the house.