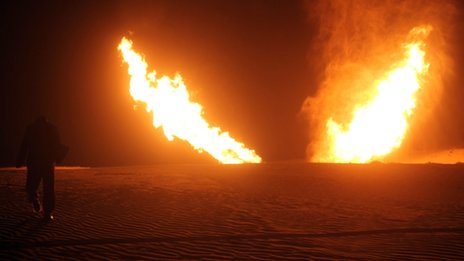 Egyptian officials say they have scrapped an agreement to supply Israel with natural gas.

Israel received around 40% of its gas supplies from Egypt and uses it to generate electricity.

Israeli Finance Minister Yuval Steinitz said the move was of “great concern”, and overshadowed peace agreements between the countries.

Egypt was the first Middle East country to sign a peace accord with Israel, in 1979, and the deal to supply energy has been a key part of agreements between the two states.

But the BBC’s Jon Leyne in Cairo says the gas deal is deeply unpopular, and one of the charges against former President Mubarak is that he sold the gas too cheaply.

Israel has insisted it is paying a fair price for the gas.

A statement from the Egyptian Natural Gas Holding Company said it was ending supplies because the terms of its contract had been breached.

Ampal, the Israeli company which buys the gas, said in a statement that it considers the attempt to terminate the contract “unlawful and in bad faith”, and demanded its withdrawal.

The company is using international arbitration to try to get compensation, after supplies were interrupted following frequent sabotage attacks on the gas pipeline across the Sinai desert in north-eastern Egypt.