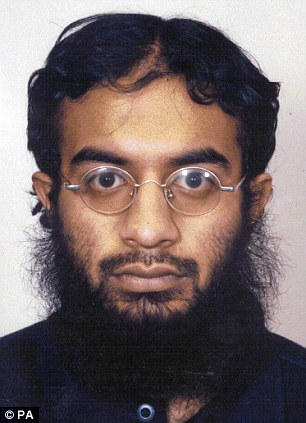 Deal: Terrorist Saajid Muhammad Badat, pictured, had his 13 year sentence cut to 11 after the agreement with prosecutors

A convicted terrorist who plotted to blow up a jet has been secretly walking the streets of Britain for two years after being freed early in return for becoming an Al Qaeda supergrass.

Saajid Muhammad Badat, 33, was jailed for 13 years for planning to destroy a transatlantic plane with a shoe-bomb in a co-ordinated attack in December 2001 with fellow Briton Richard Reid.

But yesterday it emerged that the former grammar school boy had been freed two years early after striking a secret deal to testify against a suspected terrorist in America.

In an extraordinary secret court hearing, the Islamic fundamentalist was released following a private discussion between a judge, his solicitor and prosecutors.

Badat, who was jailed in 2005, would only have been eligible for release in July this year, with a licence period extending to August 2013, but his sentence was cut in the deal agreed by the judge.

Yesterday Scotland Yard and the Crown Prosecution Service released a joint statement saying this case – the first of its kind – was a great example of how the authorities were fighting terror.