The big question, Taxi-jihad or not taxi-jihad, is still out there. My money remains on jihad. 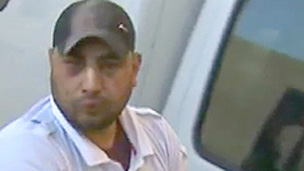 Majid Rehman will appear in court again on 10 April

A taxi driver has been remanded in custody after a collision involving eight pedestrians in the centre of Cardiff.

Majid Rehman, 28, of Grangetown, Cardiff was arrested after an incident in Wood Street on Tuesday evening.

Mr Rehman will next appear at crown court on 10 April.

The defendant spoke only to confirm his name and address.

Presiding magistrate Christopher F Dale remanded him in custody despite a bail application from the defence which included the offer of a £5,000 surety from a family friend.

Six of the injured people were a group of railway workers.

One man, 35, from the Grangetown area of the city, was still being treated in hospital on Wednesday.