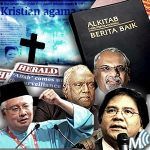 The Malaysian state of Johor, in the southern Malaysian Peninsula, has announced that it will host a conference titled the “Strengthening the Faith, the Dangers of Liberalism and Pluralism and the Threat of Christianity towards Muslims. What is the Role of Teachers?”

Teachers from state schools will be required to attend the conference on the “threat of Christianization” this Saturday.

Datuk Sheikh Abdul Halim Abdul, President of the The Malaysian Ulama Association (PUM), says “the problem of Christianisation has been around for a long while, it is real.”

“Therefore,” Halim Abdul says, “any authority or government which is Islamic has a right to… read more.

2 Replies to ““Threat of Christianization” conference held by Malaysian state”