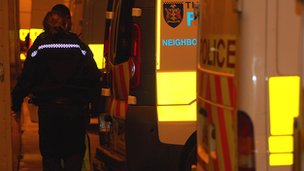 Six men from Oxford have been remanded in custody after appearing in court in connection with an investigation into child exploitation in the city.

The men face charges including rape, conspiring to rape a child, arranging child prostitution and trafficking.

They appeared before High Wycombe magistrates earlier after being charged by police on Friday.

Seven others have been bailed until next month.

The men charged in connection with the inquiry are Anjum Dogar, 30, and his brother Akhtar, 31, both of Tawney Street, and Kamar Jamil, 26, of Aldrich Road.

Thames Valley Police, investigating claims 24 girls were being exploited, arrested 13 men following raids on properties in the city on Thursday.

More than 100 police officers were involved in 14 raids.

The six men who have now appeared in court face a number of charges:

6 Replies to “Child prostitution inquiry: Six remanded on sex charges: Anjum Dogar, 30, and his brother Akhtar, 31, both of Tawney Street, and Kamar Jamil, 26,”