Original translation by Bear of the article posted at link below. 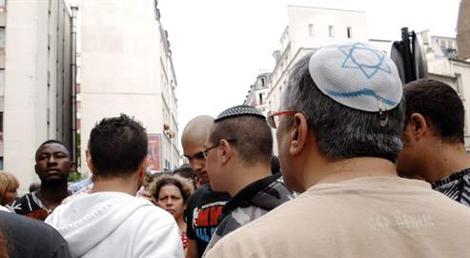 Two teenage Jews aged 16 were violently assaulted while exiting a phys-ed course on the 12th March at 6:00 PM while leaving the stadium of Porte de Bagnolet. They were provoked by two individuals who were then met by a group of youths, described as being of ‘Maghreb origin’, and from Africa; then they were kicked and punched. They were saved only by the arrival of two women, social workers who saw the scene from their car, and pulled them from the claws of their assailants, who then ran away.

One of the victims has stated to the BNVCA that the violence of the assailants was directed one of the young Jews while he was on the ground. One of them stepped on his head and smashed it against the concrete to the point where the youth lost consciousness. They were singled out because one was wearing a kippah.