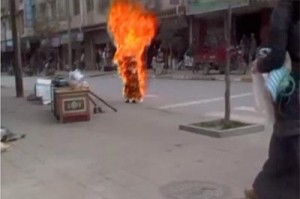 At first, consumed by fire, the unmoving, tall black object looks like an effigy stood perfectly upright on a street that could be one in virtually any town in the world. People are screaming, but it’s unclear whether it’s in excitement or horror.

Not until the thing aflame begins to crumple and collapse does it reveal itself to be a human being. Only then do arms and legs, and the head, become visible, along with its essential humanness.

What we have been watching, it turns out, is a video of the self-immolation of Tibetan Buddhist monk Palden Choetso, 35. Choetso self-immolated in an act of protest against China’s continuing occupation of Tibet late last year, but the video has only just surfaced outside of the occupied Buddhist nation.

One wonders what it must take to stand in perfect stillness during the most terrible and painful of deaths. It is testimony to the courage and spirit of Choetso, and to the spirit of the Tibetans and the horrors that have been visited upon them people by the Chinese occupiers.

After the invasion of Tibet, Tibetan nuns — and some lay women — were systematically raped, some with electric cattle rods. Some had their breasts cut off.

But the aim of China was never torture and humiliation of its own sake. It was ethnic cleansing: to eradicate Tibetan culture, and destroy… read more.