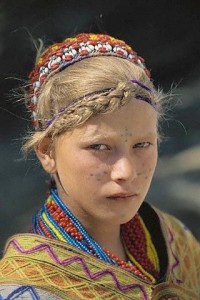 Remember the National Geographic cover of the Afghan woman with pale skin and green eyes? It wasn’t the image that most people had of the peoples of Afghanistan. Razib Khan has been shedding some light on Afghan genes in the science magazine Discover this week. In particular Khan looks at the enigmatic Kalash.

The Kalash, a little-known, largely isolated, and religiously pagan tribe, in Afghanistan claim to be the descendants of Alexander the Great.

Numbering only a few thousand, the Kalash have been pressured by Islamic extremists in Afghanistan to convert to Islam. Female Kalash in particular are targeted for conversion, undermining the small tribal community. Khaliq, a Kalash elder, complained the Guardian that Pakistan had also “treated us like animals, and [the] valley [home of the Kalash] like a zoo.”

But the Kalsh appear to have the… read more.