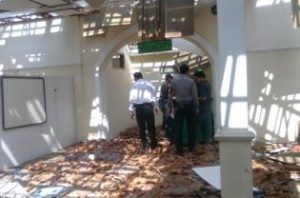 A mosque in Cianjur, West Java, was attacked yesterday by about 50 Islamic hardliners, because it was being used by local members of the Ahmadiyya faith for Fridays prayers. Ahmadis regard themselves as Muslims but believe Mirza Ghulam Ahmad (who founded the faith in India during the 19th century) to be the Mahdi or final messenger of Islam.

During the attack the mosque was ransacked, its windows were broken, and its roof was damaged.

The mosque’s caretakers had allegedly been warned not to allow the Ahmadis to use the Arrohim Mosque in Cipeuyeum village. Indonesia Ahmadiyah Congregation (JAI) spokesman Firdaus Mubarik also told the Jakarta Post, “The police warned our congregation on Thursday not to use the mosque for Friday prayers, which means that they… read more.