Another British Muslim busted for terror. 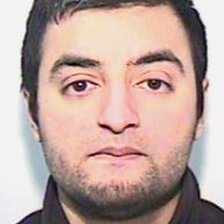 A man who downloaded a recipe for the deadly poison ricin and documents about how to make bombs has been jailed for two years and three months.

Asim Kausar, 25, from Bolton, kept the information on a computer pen drive.

The material only came to light after Kausar’s family suffered a burglary and the memory stick was handed in to police.

The memory stick contained details about ricin, assassination and torture techniques, and how to construct improvised explosive devices (IEDs).

Police had been given it so officers could view CCTV images of the break-in stored on the device.

They then came across the terror-related information.

The documents were entitled Improvised Munitions Handbook and Unconventional Warfare Devices and Techniques.

Kausar told officers he had downloaded the information out of “curiosity and a thirst for knowledge”.

The court heard Kausar had “scoured the internet” between January 2009 and June 2011 and the information he downloaded ran into thousands of pages of documents.

Sentencing him, the Recorder of Manchester Judge Andrew Gilbart QC said there was no evidence that the offending went beyond collecting information.

However he said he was satisfied Kausar’s actions “went beyond mere idle curiosity”.

“I accept that all of this material is available on the internet and can be bought from retailers and I accept some of it is out of date,” the judge told the court.

But he said that this made the material “no less dangerous or any less useful to a person committing an act of terrorism”.

When Kausar’s bedroom was searched, police found what appeared to be a “shopping list” of munitions, said Riel Karmy-Jones, prosecuting, with prices marked down next to entries of various weapons and ammunition.

His mobile phone was also seized which contained a photograph of Kausar posing with an AK rifle – believed to have been taken in Pakistan.

The court was also told about a letter written by Kausar in which he said: “I want to fight jihad for Allah”.

The letter also asked “whether he would be able to fight and whether his martyrdom would be accepted”.

3 Replies to “The court was also told about a letter written by Kausar in which he said: “I want to fight jihad for Allah”.”