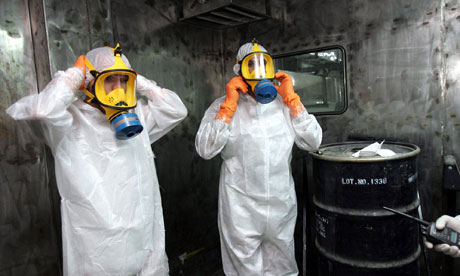 Britain’s armed forces are stepping up their contingency planning for potential military action against Iran amid mounting concern over Tehran’s nuclear enrichment programme, the Guardian has learned.

The Ministry of Defence believes the US may decide to fast-forward plans for targeted missile strikes at some key Iranian facilities. British officials say that if Washington presses ahead it will seek, and receive, UK military help for any mission, despite some deep reservations within the coalition government.

In anticipation of a potential attack, British military planners are examining where best to deploy Royal Navy ships and submarines equipped with Tomahawk cruise missiles over the coming months as part of what would be an air- and sea-launched campaign.

The Guardian has spoken to a number of Whitehall and defence officials over recent weeks who said Iran was once again becoming the focus of diplomatic concern after the revolution in Libya.

They made clear the US president, Barack Obama, has no wish to embark on a new and provocative military venture before next November’s US election. But they warned the calculus could change because of mounting anxiety over intelligence gathered by western agencies, and the more belligerent posture that Iran appears to have been taking.

One senior Whitehall official said the regime had proved “surprisingly resilient” in the face of sanctions, and sophisticated attempts by the west to cripple its nuclear enrichment programme had been less successful than first thought.

He said Iran appeared to be “newly aggressive – and we are not quite sure why”, citing three recent assassination plots on foreign soil that the intelligence agencies say were co-ordinated by elements in Tehran.

On top of that, the agencies now believe Iran has restored all the capability it lost in a sophisticated cyber-attack last year.

The Stuxnet computer worm, thought to have been engineered by the Americans and Israelis, sabotaged many of the centrifuges the Iranians were using to enrich uranium.

Up to half of Iran’s centrifuges were disabled by Stuxnet or were thought too unreliable to work, but diplomats believe this capability has now been recovered, and the International Atomic Energy Authority believes it may even be increasing.

Ministers have also been told that the Iranians have been moving some new, more efficient centrifuges into the heavily fortified military base dug beneath a mountain at the city of Qom.

The concern is that the centrifuges, which can be used to enrich uranium for use in weapons, are now so well protected within the site that missile strikes may not be able to reach them. The senior Whitehall source said the Iranians appeared to be shielding “material and capability” inside the base.

Another Whitehall official, with knowledge of Britain’s military planning, said that within the next 12 months Iran may have hidden all the material it needs to continue a covert weapons programme inside fortified bunkers. He said this had necessitated the UK’s planning being taken to a new level.

“Beyond [12 months], we couldn’t be sure our missiles could reach them,” the source said. “So the window is closing, and the UK needs to do some sensible forward planning. The US could do this on their own but they won’t. So we need to anticipate being asked to contribute. We had thought this would wait until after the US election next year, but now we are not so sure. President Obama has a big decision to make in the coming months because he won’t want to do anything just before an election.”

Another source added there was “no acceleration towards military action by the US, but that could change”. Next spring could be a key decision-making period, the source said.

The MoD has a specific team considering the military options against Iran. The Guardian has been told that planners expect any campaign to be predominantly waged from the air, with some naval involvement, using missiles such as the Tomahawks, which have a range of 800 miles. There are no plans for a ground invasion, but “a small number of special forces” may be needed on the ground, too.

The RAF could also provide air-to-air refuelling and some surveillance capability, should it be required. British officials say any assistance would be cosmetic: the US could act on its own but would prefer not to.

An MoD spokesman said: “The British government believes that a dual track strategy of pressure and engagement is the best approach to address the threat from Iran’s nuclear programme and avoid regional conflict. We want a
negotiated solution – but all options should be kept on the table.”

The MoD says there are no hard-and-fast blueprints for conflict but insiders concede that preparations at headquarters and at the Foreign Office have been under way for some time.

One official said: “I think that it is fair to say that the MoD is constantly making plans for all manner of international situations. Some areas are of more concern than others.

“It is not beyond the realms of possibility that people at the MoD are thinking about what we might do should something happen on Iran. It is quite likely that there will be people in the building who have thought about what we would do if commanders came to us and asked us if we could support the US. The context for that is straightforward contingency planning.”

Washington has been warned by Israel against leaving any military action until it is too late. Western intelligence agencies say Israel will demand that the US act if Jerusalem believes its own military cannot launch successful attacks to stall Iran’s nuclear programme. A source said the “Israelis want to believe that they can take this stuff out”, and will continue to agitate for military action if Iran continues to play hide and seek.

It is estimated that Iran, which has consistently said it is interested only in developing a civilian nuclear energy programme, already has enough enriched uranium for between two and four nuclear weapons.

Experts believe it could be another two years before Tehran has a ballistic missile delivery system. British officials admit to being perplexed by what they regard as Iran’s new aggressiveness, saying that they have been shown convincing evidence that Iran was behind the murder of a Saudi diplomat in Karachi in May, as well as the audacious plot to assassinate the Saudi ambassador in Washington, which was uncovered last month. “There is a clear dotted line from Tehran to the plot in Washington,” said one.

The International Atomic Energy Authority is due to publish its latest report on Iran this month. Earlier this year, it reported that it had evidence Tehran had conducted work on a highly sophisticated nuclear triggering technology that could only be used for setting off a nuclear device. It also said it was “increasingly concerned about the possible existence in Iran of past or current undisclosed nuclear-related activities involving military-related organisations, including activities related to the development of a nuclear payload for a missile.”

Last year, the UN security council imposed a fourth round of sanctions on Iran to try to deter Tehran from pursuing any nuclear ambitions.

Last weekend, the New York Times reported that the US was looking to build up its military presence in the region, with one eye on Iran. According to the paper, the US is considering sending more naval warships to the area, and is seeking to expand military ties with the six nations in the Gulf Co-operation Council: Saudi Arabia, Kuwait, Bahrain, Qatar, the United Arab Emirates and Oman.