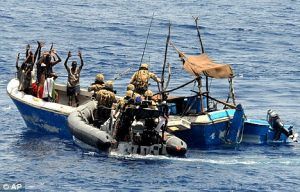 The Prime Minister pledged to relax a ban on security guards carrying weapons to tackle what he described as the ‘complete stain’ of bandits seizing ships, taking hostages and demanding ransoms.

He is determined to combat the risks to shipping off Somalia, where 49 of the world’s 53 hijackings last year took place.

Mr Cameron acted as military chiefs admitted the U.S. was using ‘hunter-killer’ drones in the area to disrupt pirates and Islamists.

Up to 200 vessels flying the Red Ensign, the flag of the British merchant navy, regularly sail close to Somalia. No ship with armed security has yet been hijacked, according to the Government.

Under the plans, which should be in place by next month, only ships travelling through the worst-affected waters, such as the Gulf of Aden, would be exempt from UK gun laws.

Somali pirates rake in millions a year from hijacked ships. Currently, around 19 vessels are held hostage.

5 Replies to “Armed guards with ‘shoot to kill’ orders to sail on British ships in war against Somali pirates!”