AINA.ORG appears to be under DDOS attack at the moment. But I reproduced their whole article below.

Coptic Christian Student Murdered By Classmates for Wearing a Cross 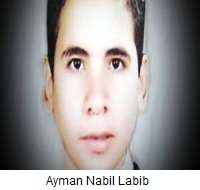 (AINA) — In mid-October Egyptian media published news of an altercation between Muslim and Christian students over a classroom seat at a school in Mallawi, Minya province. The altercation lead to the murder of a Christian student. The media portrayed the incident as non-sectarian. However, Copts Without Borders, a Coptic news website, refuted this version and was first to report that the Christian student was murdered because he was wearing a crucifix.

“We wanted to believe the official version,” said activist Mark Ebeid, “because the Coptic version was a catastrophe, as it would take persecution of Christians also to schools.” He blamed the church in Mallawi for keeping quiet about the incident.

Today the parents of the 17-year-old Christian student Ayman Nabil Labib, broke their silence, confirming that their son was murdered on October 16, in “cold blood because he refused to take off his crucifix as ordered by his Muslim teacher.” Nabil Labib, the father, said in a taped video interview with Copts United NGO, that his son had a cross tattooed on his wrist as per Coptic tradition, as well as another cross which he wore under his clothes.

Both parents confirmed that Ayman’s classmates, who were present during the assault and whom they met at the hospital and during the funeral, said that while Ayman was in the classroom he was told to cover up his tattooed wrist cross. He refused and defiantly got out the second cross which he wore under his shirt. “The teacher nearly chocked by son and some Muslim students joined in the beating,” said his mother. 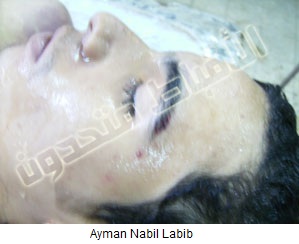 According to Ayman’s father, eyewitnesses told him that his son was not beaten up in the school yard as per the official story, but in the classroom. “They beat my son so much in the classroom that he fled to the lavatory on the ground floor, but they followed him and continued their assault. When one of the supervisors took him to his room, Ayman was still breathing. The ambulance transported him from there dead, one hour later.”

The father said that everyone in Mallawi knew how the event took place, but not one of the students’ parents was prepared to let their children come forward and give a statement to the police. “They are afraid of the school administration, which has lots of ways to harass the students, as well as being afraid of the families of the two Muslim killers.”

“I insist that the Arabic teacher, the headmaster, and the supervisors should be charged as well as the two students who committed the crime,” said Nabil. “The Arabic language teacher incited the students to attack my son, the headmaster who would not go to the classroom to see what is going on there when alerted to the beatings, but rather said to be left alone and continued sipping his tea, and the supervisors who failed in their supervising duties.”

Prosecution has three witnesses, two men working at school who named the assailants and one student who wanted to retract his statement, but was refused.”

“The evidence is under lock and key. Everyone is hiding the evidence. We will know the truth after forensic medicine has finished the report next week,” said Nabil, adding that the head of detectives on the case tried to influence the witnesses, claiming that the murder took place as a result of friction between students.”

The governor of Minya, El-Rouby, visited the Coptic Bishop Dimitrious of Mallawi to extend his condolences, accompanied by representatives of Minya military authorities. He also suspended the school’s headmaster and the two supervisors, as well as two social workers who were on duty when Ayman died, and referedg them to an investigation committee. But all of them have disappeared since then.

After the funeral service for Ayman, over 5000 Christians marched along the streets of Mallawi, denouncing the killing of a student whom they described as “Martyr of the Cross,” and the repeated killings of Copts in Egypt.

Prominent columnist Farida El-Shobashy wrote in independent newspaper Masry Youm “I was shaken to the bones when I read the news that a teacher forced a student to take off the crucifix he wore, and when the Christian student stood firm for his rights, the teacher quarreled with him, joined by some of the students; he was beastly assaulted until his last breath left him.” She wondered if the situation was reversed and a Muslim was killed for not removing the Koran he wore, what would have been the reaction.

Farida pointed out that the gravity of the incident is where it took place and who incited the attack (the teacher). She went on to blast the Ministry of Education for neglecting the education syllabus to prevent discriminatory contents but instead “left it to teachers to spread the fanatic Wahabi ideology.”