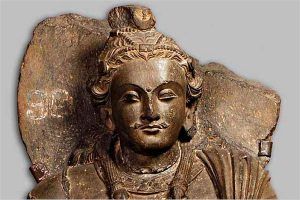 I’ve been waiting for a good excuse to bring up Andrei Znamenski’s Red Shambhala: Magic, Prophesy, and Geopolitics in the Heart of Asia. The coming exhibition of Buddhist art at New York’s Asia Society has provided one.

Published by Quest Books (the publishing house of the Theosophical Society), Red Shambhala is a serious work of scholarship, that explores attempts to co-opt and manipulate Buddhism in Tibet and Mongolia by Russian Bolsheviks after the October Revolution, as well as other curious characters. Not the least of these was Nicholas Roerich, a Russian immigrant in New York.

Today, Roerich is best known for his paintings (he was a painter as well as a mystic and political adventurer), which can be seen at the Nicholas Roerich museum in NY, where Znamenski condicted research into this little-known but highly intriguing figure. I like Roerich’s art, but, I must admit, reading Red Shambhala, I didn’t like Roerich. In Znamenski’s portrayal, he was a egomaniac, who manipulated his children, and dreamed of usurping the Dalai Lama, and instituting himself as head of a great… continue reading.

One Reply to “Islam and Communism: Against Buddhism”