I believe that Mohamed, once the SOB actually took the city of Mecca, made it his mission to destroy all the ‘idols’ in the Kaaba, itself now a Muslim idol where bizarre and pointless rituals are conducted to cement ones Muslim faith. I suppose this fellow thought he was doing Mohamed’s work, which of course he was. The stone Buddhas in Afghanistan being another modern example of wonton destruction of anything not Islamic.

From Tea and Politics 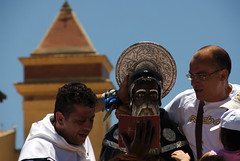 An immigrant from the Maghreb has entered the sanctuary of Saint Calogero and has destroyed the image of the patron saint, last July 9th.

The church was open for the 7:30 mass, when the immigrant, of North African origins, has entered and gone directly into the sacristy, where the statue of Saint Calogero was. He took it and threw it violently against the wall, destroying it completely.

A believer who was at the church had tried to arrest the immigrant, but was hurt. Four policemen were needed to control the man and then to arrest him.

Saint Calomero, a Greek saint, lived in the city in the Vth century, evangelised Sicily and is much revered in the island. He is always represented as a black man. In fact, the Agrigento’s archbishop has praised him as “an example of integration between people”.

Please click over to the link at the top to see an Italian video of this event.

3 Replies to “Italy: Muslim destroys the statue of the patron saint of Agrigento in Sicily”