Now I wonder where the flotillas are for Saudi women. Or Saudi ‘apartheid’ weeks, often months it seems, on Western university campus’ to support something which actually does look a lot more like apartheid than anything one finds in Israel. The fact that women are not allowed to drive in a UN member state country merely because they are women and the state religion mandates that women should be disenfranchised of any autonomy in every possible way should be the source of outrage of every college campus in the US, Canada and Europe and indeed, East Asia as well. Instead, university students seem to prefer to be useful idiots and hasten their own dhimmitude.

Even this BBC story manages to utterly avoid the kind of rightful outrage and contempt that they should show towards the Saudi genuine apartheid of women, that they would heap upon any story on Israel, even then the issue is trivial, spun out of all relationship to the facts or outright fiction.

WATCH: Saudi Arabia’s women are forced to rely on men to do the driving – which puts many jobs off-limits, and makes running a business almost impossible

The video shows a young woman getting into her car for a spin around town with a friend. Giggling away, they sound excited yet nervous. And all the while, they comment on the reactions of passers-by.

So far, the story sounds uneventful. After all, millions of women across the world drive every day without a second thought.

Only the difference is, this video was shot by 28-year old Solafa from Saudi Arabia, the only country in the world that bans women from driving.

On June 17, dozens of videos similar to Solafa’s surfaced on the internet, all showing women behind the wheel in defiance of a ban that is not enforced by law but is a religious fatwa imposed by Muslim clerics.

It was a protest of a different kind – unlike the mass demonstrations that have been seen throughout the region this year, this was a campaign of just 50 women.

But one thing it has in common with the Arab protests is the role social media played.

Through Twitter and Facebook, the ‘Women2Drive’ campaign gave women a voice for other people to hear. US Secretary of State Hillary Clinton openly supported their cause. Even some of the Saudi royals have backed what the women are doing. 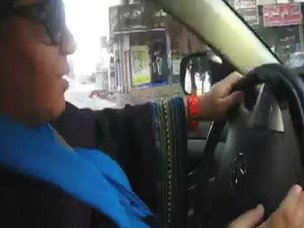 Solafa Kurdi uploaded a video of herself driving in Saudi Arabia to YouTube.com

Solafa and her friends joined the campaign to prove a point.

“Being a photographer needs me to be in different places and at different times,” says Solafa. “I have to pay around $500 every month just for a driver, when I could do what he’s doing myself.”

Although Solafa says she can afford that extra cost, it is more of a burden for families where women are paid lower salaries.

A recent report published by the Dubai School of Government examined the role social media has played in the Arab uprising. It found that the percentage of women who used Facebook rose from 32% to 33.5% in the first three months of this year. 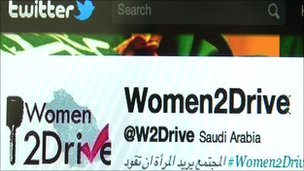 Looking at the effect of social media on the region’s economy is still in its infancy, according to Fadi Salem, Director of Governance and Innovation at the Dubai School of Government and the co-author of the report. Nevertheless, it does have potential.

“If compared to the emergence of the internet over the last decade and how it contributed to economic development, there are many indicators suggesting that this could be the case as well for social media,” says Salem.

“In theory it has this personal characteristic, it has the anonymity, if that’s a barrier for some women to participate or start businesses or join a political discussion.”

And taking part is crucial for the Gulf’s biggest economy.

More than half of Saudi’s university graduates are women.

Last month saw the opening of the world’s largest women-only university in Riyadh. But when it comes to the world of work, it is a different story.

For the rest of this whitewash of what should be a hard hitting story about Islamic contempt for women, please click over to the BBC: