He then began to sell her to workers at pubs, restaurants and fish and chip shops to fund his gambling habit.

The girl later told police he supplied her with drugs and alcohol, adding that she had sex with him ‘lots of times’ at locations including his aunt’s home.

Later she was ‘sold’ to three staff from a Bengali restaurant so Ahmed could get petrol money.

Miss Gould said: ‘After the men finished work T [Ahmed] drove them to a flat above a fish and chip shop in Madeley. Each of the men had sex with her.

‘She received none of the money, but the girl believed that Ahmed had made about £100 from selling her. She heard them sorting out the price for her and saw the money being handed over.’ 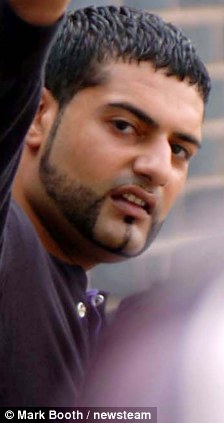 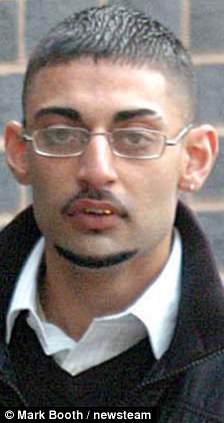 In the summer of 2009, Mohammed Islam Choudhrey, 52, known as Terry, had sex with her while she was ‘paralytic, felt dizzy and unable to move’, the court heard.

The jury was told that the girl ‘felt dirty for having sex with Terry because he was so old’, but she continued to meet Choudhrey who took her on his deliveries for a fast food shop.

Miss Gould said that she performed sex acts on Choudhrey who would buy her food, cannabis and alcohol and also bought her two mobile phones.

The court also heard details of the alleged rape of a 13-year-old girl who was drawn into the world of Ahdel Ali, 23.

Miss Gould told the jury that the youngster felt neglected as her parents spent a lot of time with one of her siblings who was ill and needed hospital care.

Her alleged abuser Ali, known by the Western nickname Eddie, came from a traditional Pakistani background and was destined for an arranged Islamic marriage.

Miss Gould said: ‘Eddie deliberately identified and then targeted this girl who was young, naïve and vulnerable.

‘What possible interest could a 20-year-old working man, a man in a traditional Pakistani household destined for a pre-arranged marriage to a chosen bride… have in a 13-year-old schoolgirl?

‘Their lives, cultural backgrounds, ages and interests were wholly incompatible.’
‘Eddie deliberately identified and then targeted this girl who was young, naïve and vulnerable’
She said Ali had groomed the girl and had offered her drugs before ‘testing the waters’ to see how she reacted when he introduced sex into the conversation.

The court was told that she had fallen for Ali. Miss Gould added: ‘[The alleged victim] described vividly how vulnerable she was at this time: she thought she was in love with Eddie and she wanted some love at that time of her life, to feel that someone cared for her and she thought, because he was showing her affection, it was real.’

Almost a year later, the court heard she was allegedly raped again by one of Ali’s associates, Mohammed Ali Sultan.

Miss Gould said Ali Sultan had picked up the teenager in his blue Golf car and asked her to perform a sex act on him around September 2008.

When she refused it was claimed he slapped her across the face before raping her in a layby.

Following the alleged attack it was claimed Ali Sultan called her a ‘dirty little slag’ before taking her back to a row of shops and leaving her there.

Ali Sultan is also accused of sexual activity with another 15-year-old girl.

One of her friends allegedly told police that they were sneaked into a house by the back entrance when the offence was supposed to have occurred because ‘Asians can’t hang around with white people’. 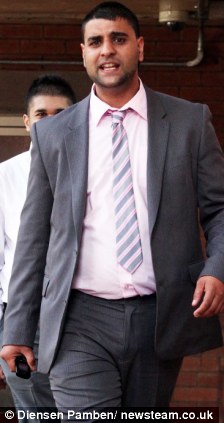 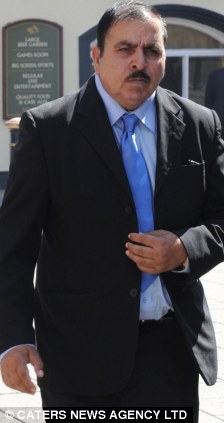 In the dock: Left, Mohammed Ali Sultan, who allegedly slapped, raped and verbally abused one 13-year-old victim. Right, Mohammed Younis, the oldest defendant, is accused of using his home as a brothel where men could have sex with the girls

The court also heard further details about Mohammed Younis and Abdul Rouf who are both accused of using their homes as brothels.

Miss Gould said: ‘Their premises were being used in effect as brothels, places where men could have sex out of sight with young females.

‘The provision of those venues acted as an incitement to such girls to provide sexual services for payments of some kind.’
‘When they receive attention from others, they soak it up, believing themselves to be the objects of genuine emotions and affections’
The court heard the victims were the products of severely disrupted families and had no sense of self-worth, leaving them unable ‘to distinguish between abuse and affection’.

Miss Gould said they ‘do not value themselves and… have no expectation that they will be valued by others.’

She added: ‘When they receive attention from others, particularly what they see as exotic older males with money and cars, they soak it up, believing themselves to be the objects of genuine emotions and affections.’

On one occasion, after Ahdel Ali had slept with the 13-year-old in his car, he told her that his wife lived just behind a nearby fence, the court heard.

Brothers Ahdel and Mubarek Ali were alleged to have been the main players in the gang, facilitating contact between the young girls and the men who would go on to become their abusers, the court heard.

One of the girls was allegedly told by another victim that Ahdel Ali had filmed them having sex and was showing it to other people.