This is going to be very interesting.

Following the Prime Minister’s Munich speech in February when he spoke of the failure of multiculturalism, the Government is now fleshing out the policy and explaining the practical implications. Having unequivocally and quite rightly declared war on Islamism (ie Islamic terrorism), it is widely reported (and here, here and here) that the Government now intends to tackle ‘radicalisation’ (ie the cause of Islamism) by cutting state funding ‘to any Islamic group that espoused extremist views’.

These ‘extremist views’ have yet to be codified, but they must of necessity include those precepts of sharia which are inimical to the values of a liberal democracy. David Cameron has already called for an end to the sharia agenda : he made it clear that any expansion of the Islamic code in the UK would indeed undermine society and alienate other communities. He was right to observe that two codes of law cannot work side-by-side: one must give way to the other. We cannot have different laws for different communities: all citizens must be equal before the law, under the ultimate jurisdiction of English or Scottish law. 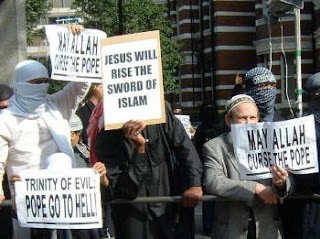 And so it appears henceforth that Islamic groups will need to subscribe to ‘key British values’. Home Secretary Theresa May criticises in particular the Federation of Student Islamic Societies for being soft on extremism. “They need to be prepared to stand up and say that organisations that are extreme or support extremism or have extremist speakers should not be part of their grouping,” Mrs May said.

But here’s where it gets interesting.

The Government defines as extremist anyone who ‘does not subscribe to human rights, equality before the law, democracy and full participation in society’, including those who ‘promote or implicitly tolerate the killing of British soldiers’. 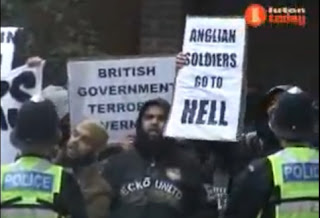 Those who actively and explicitly promote the killing of British soldiers are traitors to the state and (in His Grace’s opinion) ought to be dealt with in the traditional manner. But the ‘implicit toleration’ of such killing is treason of quite a different hue: it appears that the Muslim Council of Britain will no longer be able to maintain a dignified silence when the UK goes to war with some section of the Ummah, for silence will surely amount to implicit toleration. Does praise of bin Laden (his heirs and successors) amount to implicit toleration of the killing of British soldiers? Does the refusal of a British Muslim soldier (or reservists) to fight in Iraq or Afganistan constitute implicit toleration of the killing of their comrades?>For the rest of this very interesting set of observations, please click over to the site linked here and at the top.